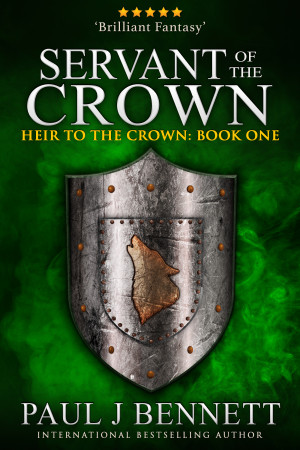 Servant of the Crown: An Epic Fantasy Novel

By Paul J Bennett
An old warrior, too stubborn to die. A royal heir, hidden since birth.
A kingdom on the brink of war.

Tragedy tears his world apart, forcing him back into a warrior's life, until an act of self-sacrifice cuts him off from all he knows. Now he seeks a new purpose, for what is a warrior who has nothing left to fight for?

A medieval fantasy series about a warrior who refuses to retreat More
An old warrior, too stubborn to die.
A royal heir, hidden since birth.

Can they save a realm on the brink of war?

Tragedy tears Gerald's world apart and only his unwavering loyalty saves him. After serving as a soldier for years, a single act of self-sacrifice thrusts his future into the world of politics. Cut off from all he knows, he becomes no more than a pawn to those in command.

Banished with little more than the clothes on his back, he seeks a new purpose, for what is a warrior who has nothing left to fight for?

A fateful meeting with another lost soul unmasks a shocking secret, compelling him to take up the mantle of guardian. Bandits, the Black Hand, and even the king, he battles them all for the future of the realm.

Memories of the past, secrets that shape the future; his adventure is only the beginning.

Servant of the Crown is the series starter in the epic Heir to the Crown medieval fantasy series. If you like realistic fight scenes, compelling characters, and a gripping story, then you will love Paul J Bennett's tale of a warrior who refuses to retreat.

Pick up your copy of Servant of the Crown, and discover the realm of Merceria today!

The Chronicles of Cyric:
Into the Maelstrom - Prequel
A Midwinter Murder
The Beast of Brunhausen
A Plague in Zeiderbruch

What readers are saying about Paul J Bennett’s books:
★★★★★ -"Fantastic Fantasy!"
★★★★★ -"Epic Battle Scenes!
★★★★★ -"I’m hooked on this series!"
★★★★★ -"Exciting Sword and Sorcery"
★★★★★ -"Fabulously written, loved it."
★★★★★ -"Outstanding work of fantasy"
★★★★★ -"The most amazing adventure"
★★★★★ -"Another excellent book series!!"
★★★★★ -"I just could not stop reading them"
★★★★★ -"Wow! Best book I’ve read in a LONG time!"
★★★★★-"Thoroughly absorbing, exciting and mystical."
★★★★★ -"If you like fantasy fiction, then this is a must-read!"
★★★★★ -"This story gripped me and kept me turning the pages."
★★★★★ -"Action, Intrigue, Adventure, Romance and some twists!"
★★★★★ -"I love the book, had me on edge, could not put it down!"
★★★★★ -"Full of suspense, intrigue and action throughout the story"
★★★★★ -"The characters you love in the books come to life in such a fabulous way."
★★★★★ -"The tale flows effortlessly along, blending action, adventure and heartwarming scenes."
Available ebook formats: epub mobi pdf lrf pdb txt html
First 20% Sample: mobi (Kindle) lrf pdb Online Reader
Price: $5.99 USD
Buy Add to Library Give as a Gift
How gifting works
Create Widget
Tags: rpg knights high fantasy dungeons and dragons sword sorcery historical fantasy books medieval action adventure epic military series litrpg coming of age historical character driven
About Paul J Bennett

Paul J Bennett (b. 1961) emigrated from England to Canada in 1967. His father served in the British Royal Navy, and his mother worked for the BBC in London. As a young man, Paul followed in his father’s footsteps, joining the Canadian Armed Forces in 1983. He is married to Carol Bennett and has three daughters who are all creative in their own right.

Paul’s interest in writing started in his teen years when he discovered the roleplaying game, Dungeons & Dragons (D & D). What attracted him to this new hobby was the creativity it required; the need to create realms, worlds and adventures that pulled the gamers into his stories.

In his 30’s, Paul started to dabble in designing his own roleplaying system, using the Peninsular War in Portugal as his backdrop. His regular gaming group were willing victims, er, participants in helping to playtest this new system. A few years later, he added additional settings to his game, including Science Fiction, Post-Apocalyptic, World War II, and the all-important Fantasy Realm where his stories take place.

The beginnings of his first book ‘Servant to the Crown’ originated over five years ago when he began running a new fantasy campaign. For the world that the Kingdom of Merceria is in, he ran his adventures like a TV show, with seasons that each had twelve episodes, and an overarching plot. When the campaign ended, he knew all the characters, what they had to accomplish, what needed to happen to move the plot along, and it was this that inspired to sit down to write his first novel.

Paul now has four series based in his fantasy world of Eiddenwerthe, and is looking forward to sharing many more books with his readers over the coming years.

About the Series: Heir to the Crown 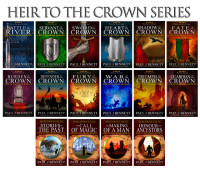 A medieval fantasy series fraught with mystery, intrigue, and plenty of battles, all set in the brilliantly created kingdom of Merceria and its surrounding realms.

Also in Series: Heir to the Crown

Reviews of Servant of the Crown: An Epic Fantasy Novel by Paul J Bennett

You have subscribed to Smashwords Alerts new release notifications for Paul J Bennett.

You have been added to Paul J Bennett's favorite list.

You can also sign-up to receive email notifications whenever Paul J Bennett releases a new book.