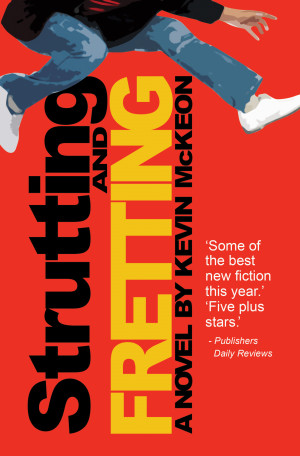 By Kevin McKeon
After Macbeth, is there life beyond the deep fryer? A young man in a theatre troupe struggles to get his life together after graduate school and a failed marriage. More
"At the forefront of all the serious new fiction released this year." - Midwest Book Review

Got reservations? Noncommittal Bob does - about his life. And his wife has left him. And he's broke. Party!

School's over, and Bob has landed an acting job at a major repertory theatre on the California coast. But instead of relishing his success, Bob is preoccupied with doubts about his talent, his life choices and his future.

But hey - four months of solid work is something, right? Maybe, just maybe, Bob can turn his life around over the summer - and perhaps be invited to keep his job in the fall. But it may take a resolve and a determination that Bob does not, at this point in his life, have an abundance of:

"Who am I to think I can do this? My marriage is failing, my tenure in the Ivory Tower of Education is over and my MFA degree is really a great credential for a career in fast food. What does it matter to the deep fryer guy that I've done the definitive Macbeth at age 24?"

Life to Bob: Make something happen. October is bearing down fast.

"McKeon times these beats impeccably; he writes with a kinetic energy that propels Bob's darkest and funniest moments at the same pace, making for both a fully realized narrator and a compulsive read." - Kirkus Reviews

Kevin McKeon has adapted many books for performance on stage, including Anne Tyler's Breathing Lessons, Dinaw Mengestu's The Beautiful Things that Heaven Bears and Charles Dickens' A Tale of Two Cities. His adaptation of David Guterson's Snow Falling on Cedars has been performed at many theaters across the United States, including Portland Center Stage, Centerstage Baltimore, Hartford Stage and Theatreworks in San Jose, California. His adaptation of Tolstoy's Anna Karenina was commissioned by Portland Center Stage and premiered there, and was a part of the Denver Center's 2018-19 season. He lives in Seattle with his wife Jane. Strutting and Fretting is his first novel.

Strutting and Fretting
After Macbeth, is there life beyond the deep fryer? A young man in a theatre troupe struggles to get his life together after graduate school and a failed marriage. A novel by Kevin McKeon.

Reviews of Strutting and Fretting by Kevin McKeon

You have subscribed to alerts for Kevin McKeon.

You have been added to Kevin McKeon's favorite list.

You can also sign-up to receive email notifications whenever Kevin McKeon releases a new book.