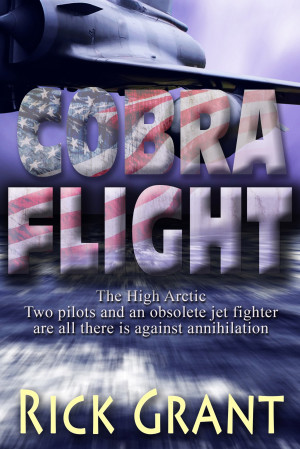 By Rick Grant
The High Arctic. Jack Standish, former fighter pilot and now just a freelance bush pilot on the ragged edges of aviation, is swept up in a deadly conspiracy based in an abandoned cold war military base. On threat of death to himself and a long time pilot friend, Standish is forced to fly an obsolete supersonic fighter on a mission that could trigger thermonuclear war. More
The High Arctic. Late-Winter.

Jack Standish, former fighter pilot and now just a freelance bush pilot on the ragged edges of aviation, flies a strange team of scientists to a remote island near Greenland.
Discovering that an old pilot friend is a hostage, under threat of death to fly an obsolete but still lethal supersonic fighter, Standish rescues Phillip and tries to escape across the Arctic Ocean in a wild flight for freedom.
It all goes wrong. The two end up at the center of an elaborate plot that threatens thermonuclear war.
Ripping at supersonic speeds over the High Arctic, Jack and Phillip fight to outwit the ruthless woman at the heart of the threat.

I am a pilot, as well as journalist and consultant, with years of experience throughout the Circumpolar Arctic.

I am a British and Canadian citizen with many years of experience as a correspondent and producer in Television and Radio.

For the past several years I have worked as a consultant to international aid groups and military commands, such as the U.N. and NATO, in most of the world’s war zones and humanitarian disasters.

You have subscribed to alerts for Rick Grant.

You have been added to Rick Grant's favorite list.

You can also sign-up to receive email notifications whenever Rick Grant releases a new book.