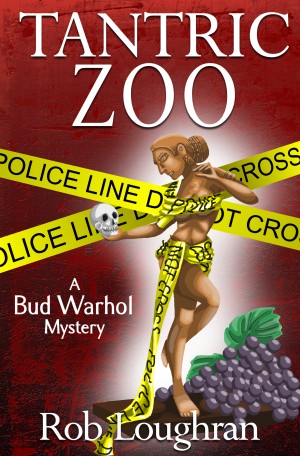 Until 2008 when the body is discovered and forensic anthropologist Bud Warhol tracks the campers down. Bud finds the murderer but also discovers how two decades of guilt has altered and affected the lives of everyone involved with the Tantric Zoo.

“A rollicking good read.”
—Linda McCabe, author of Quest of the Warrior Maid

Rob has 23 books in print: mystery novels, science fiction, young adult, short story collections, joke books, and books on writing. He has published 200+ articles in national publications and also has a busy career as a failed screenwriter.

Review
Pattimari Sheets Cacciolfi (pen in past-diamond) reviewed on Feb. 14, 2013
(no rating)
I was introduced to this book and noticed right away it was a book I'd be interested in reading. People were raving about it which wet my interest so here I am writing a review of a book I downloaded and started to read.
I suggested you all out there do the same because I know it is going to be a real read with humor and good writing.
Pattimari Sheets Cacciolfi, author of 28 books

I have so many questions about this book. I couldn't get through the first 50 pages without putting it down a few times and asking myself "What in the world is going on?"

To be honest, Im not sure what was happening, where they were, and what was going to happen next.

I'm not to sure even who the main characters were. It skipped around to much and left me feeling blank. The dialogue of the characters was absent. I couldn’t connect with them.

I thought it would be an sexy, exotic short.. but maybe it was a little to far fetched for my tastes...

Rob Loughran's great sense of humor and place shine through in this fun read. The well named detective Bud Warhol and odd assortment of characters kept me going as I set down books by much more famous authors to keep picking up The Tantric Zoo.

Tantric Zoo begins in 1987 at Tantricity Hill with four very different couples in different stages of their lives. Altair and his wife Apple run Tantricity Hill. The other three couples are Arnold and Missy, Debra and Devon, and Helena and Blake. Each couple has their own reason for visiting Tantricity Hill. Tantricity Hill is a retreat, focusing on sex therapy and allowing campers to reconnect with themselves as well as their significant others. During their time, they each explore their minds, bodies, and sexuality. They are able to try new things without distractions. The first half of the book, we get to know each character. We find out who they are, why they are there and what they hope to find and explore.

About halfway through the book, we meet the main character, Bud Warhol. It is now 2008, 21 years after they buried the body. The body is discovered. Bud is an anthropologist who works with the police to determine if it’s a murder or historical burial site. We follow Bud on his quest to find the campers from that weekend.

This book was an interesting read from start to finish, it was unlike any book I have ever read. I was surprised Bud was able to find everyone involved with the murder so quickly. Bud was smart and resourceful for getting the information he needed to solve the case. I was also surprised at how open and honest the campers were when Bud came to question them. I think the guilt from all those years ago just ate them up. Someone had to tell the truth about what happened. While they were all involved with the cover up, they were honest after the truth was told. After all these years, they came to terms about what they did and they were ready to face the consequences.

This book is sexy and funny and fun. It begins in the 1980s at a hippie/New Age sex camp. During a weekend of sexual experimentation (described graphically by the Author)one of the atendees is murdered and the group disposes of the victim.

It's at this point, halfway through the book and twenty years later, that we meet the main character! Very odd, I thought. But Bud Warhol helps the reader catch up on the cast of rogues--where they are and how they have changed--all while catching the murderer. Not only is this a satisfying and entertaining mystery,but a thoughtful and perceptive character study. I'm looking forward to Bud Warhol's next adventure.

I just bought this book and frankly I could not put it down. I was surprised by the flow, twists and turns that kept me wanting to read it late into the night. I hammered this book down, Man-style, in 2 days. Longhran knows how to weave an edge of your seat mystery and Bud fits the definition of a man!

Kent Rodgers - Calling All Men, How to Slay your Inner Princess.

You have subscribed to alerts for Rob Loughran.

You have been added to Rob Loughran's favorite list.

You can also sign-up to receive email notifications whenever Rob Loughran releases a new book.