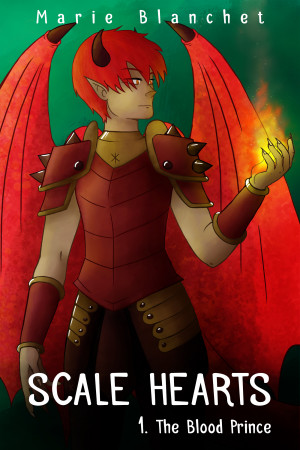 The first book in the Scale Hearts trilogy, The Blood Prince is a story about dragons and rebellions, but also about inner strength and figuring out your place in the world.
Available ebook formats: epub mobi pdf lrf pdb txt html
First 20% Sample: mobi (Kindle) lrf pdb Online Reader
Price: $0.99 USD
Buy Add to Library Give as a Gift
How gifting works
Create Widget

Marie Blanchet is a designer by day and a writer by night, which means that she doesn’t really sleep a lot. Graduated from the Université du Québec en Outaouais in graphic design and comic arts in 2014, Marie has since gone on to write a webcomic and work full time in graphic design. The Blood Prince is her first novel, and she intends to write a great many more.
She loves fantasy and sci-fi, long walks in the forest, and taking pictures of her rabbit.

Reviews of The Blood Prince by Marie Blanchet

You have subscribed to alerts for Marie Blanchet.

You have been added to Marie Blanchet's favorite list.

You can also sign-up to receive email notifications whenever Marie Blanchet releases a new book.