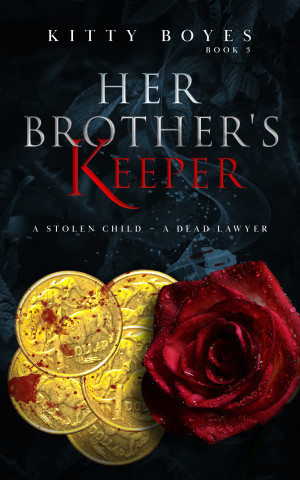 SOMETIMES HELPING A STRANGER DOESN'T WORK OUT WELL.
Have you ever helped out a stranger, only to find your normal life turns into something that resembles a nightmare?
Arina did.
It began with a dead lawyer and escalated to unimaginable terror when her two-year-old son was kidnapped.
Will she find the killer of the dead man and more importantly, will Arina survive the loss of her son? More
HER BROTHER’S KEEPER
Book Three of the Award Winning Arina Perry Mystery Thriller Series

A STOLEN CHILD - A DEAD LAWYER

The tide of newfound bliss turns sharply on Arina’s life and shatters all she held sacred after the dead body of a lawyer is discovered in one of her motel units.
Despite learning the death was a suicide, the sister of the deceased man insists he was murdered and seeks Arina’s urgent help to find his killer.
Arina inadvertently puts lives on the line when she discovers she is dealing with ruthless men deep into money laundering and tax evasion scams. Thugs, who do all they need to protect their interests and avoid detection. Even murder.
Then her son Ben vanishes. Stolen from under her nose. Kidnapped. Her rage, confusion, and utter heart destroying desperation grows in nightmarish fear of finding her son alive.

Kitty has written her 5-book Mystery Suspense novels from the pristine coast of Western Australia.
Follow her writing journey at www.kittyboyes.com she welcomes your visit and likes when you stay for a quick chat. Subscribe and become an email member to stay on to learn when and if, book six hits the shelves.

Her Brother's Keeper
The death deemed a suicide, the sister insists he was murdered and seeks Arina’s urgent help to find his killer. All good until her son is kidnapped.

This award winning series will leave you gasping, sometimes in horror, sometimes in surprise, but always delivering a reading satisfaction that provides many hours of entertainment not found in the movies. The series takes you on an adventurous ride from a new love through several life threatening, heart pounding dangers. Not for the overly squeamish, but if you like an easy read with enough action and tight plots that make you eager to keep on reading then this is the series for you! Arina Perry the strong female character who grows throughout as she gains new confidences. Arina puts herself out there, often winging it to solve crimes, both against her and her family and others. She even offers you a sprinkling of the paranormal. Do yourself a deserved favour, get the whole series in one go, then sit back and dive into Arina’s world. It’s an interesting place.

Reviews of Her Brother's Keeper by Kitty Boyes

You have subscribed to alerts for Kitty Boyes.

You have been added to Kitty Boyes's favorite list.

You can also sign-up to receive email notifications whenever Kitty Boyes releases a new book.