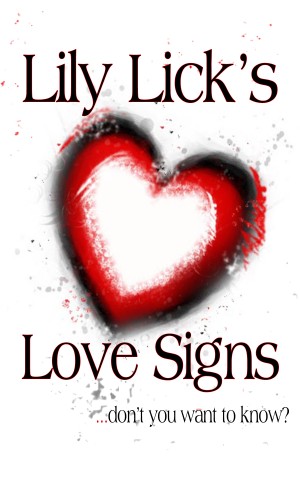 Each Sign has its own section and matchup with every other sign. Lily Lick writes with humor and insight offering you information about yourself and your partner(s) that will fuel your imagination and make you realize the limitless possibilities for dirty fun that are right in front of you, next to you, and across from you on the Zodiac Wheel. Everyone wants to be the best and a very big part of being the best is knowing just what to do to, or with your lover. But is that enough? Lily Lick’s Love Signs tells you why they like it. Chances are they don’t even know themselves why certain things just rock their little socks but there’s no reason why you shouldn’t gently wield that power. ...Don’t you want to know?

What other's are saying about Lily Lick's Love Signs

"Not sure why your Aries is always bossing you around in bed? Curious about what may be hiding behind Virgo’s charming and virginal (ha!) smile? Wish you knew what had gone wrong with that mysterious Aquarius lover? Lily Lick’s Love Signs provides satisfaction for the curiosity in all of us."
Oysters & Chocolate

Lily Lick was born in Scotland, spent her formative years in Northern Ontario, and advises there’s more to the bush than black flies and blueberries. When other kids were playing Snap and Hearts, Lily could be found laying the cards out and telling anyone who would listen, what their fortune was going to be. Her short stories and poetry (under a pen name) have been published on line at Clean Sheets and Slow Trains, as well as in print in the Mammoth Book of Erotica, Mammoth Book of Best New Erotica, Mammoth Book of Women’s Fantasies, Sex & Laughter, and the Porn to Poetry series. She is not so much inspired by sex, but aware of just how much it, and everything it entails, fuels the world; different degrees and different situations, but the bottom line is it’s all about getting off. It’s not about getting over, it’s about getting with…as often as you can, and having as much fun as you can doing it.

You have subscribed to alerts for Lily Lick.

You have been added to Lily Lick's favorite list.

You can also sign-up to receive email notifications whenever Lily Lick releases a new book.