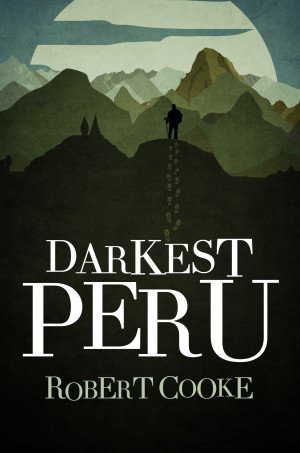 By Robert Cooke
A struggling actor embarks on an unwise adventure into the Peruvian wilderness in search of a hidden Inca temple. His need to escape 'real life' sees him negotiating the towering Andes and sprawling Amazon basin, fending for himself in a land growing more dangerous by the minute. Alone in the wild he is left with ample time to contemplate why he ever thought it was a good idea. More
Disillusioned with his life and the mundane stress of living to pay your rent that plagues young people in London, our narrator, a struggling actor in his early 20′s, travels to Peru where he embarks on a perilous journey to discover the secret Inca temple Quyllur-Wasi. With the towering Andes and sprawling Amazon before him he seeks an escape from ‘real life’, an adventure to make the explorers of old proud.

However, being completely unprepared for the whole thing, events start to go a little sideways. Miles from civilisation, and with no contact with the wider world, he must fend for himself in a land getting more dangerous by the minute. Alone in the wild, and pursuing a goal he isn’t even sure exists, he is left with ample time and opportunity to reflect on quite what it is he is doing with his life.
Download: epub mobi (Kindle) pdf more Online Reader
lrf pdb txt
Price: Free! USD
Add to Library
Create Widget
Tags: adventure travel reflection journey monsters peru fiction travel travelogue
About Robert Cooke

I’m a Writer, Theatre Practitioner and avid traveller from Suffolk, England. Having trained at Middlesex University in Theatre Arts I have worked and performed in a number of capacities from Lighting Designer to Stand-Up Comic. My debut play ‘The Box’ was Highly Commended in the Liverpool Hope Playwriting Prize 2014. My first novel, ‘Darkest Peru’, came into being as a result of a 6 week backpacking journey around Peru that resulted from a growing frustration of working and paying rent in London. I’ve recently released a novella entitled ‘The Indescribable Library Of Oddments’ based on an ongoing storytelling project. I’m currently starting work on the follow up to these two books tentatively titled ‘The Vault Of Horrors’.

You have subscribed to Smashwords Alerts new release notifications for Robert Cooke.

You have been added to Robert Cooke's favorite list.

You can also sign-up to receive email notifications whenever Robert Cooke releases a new book.