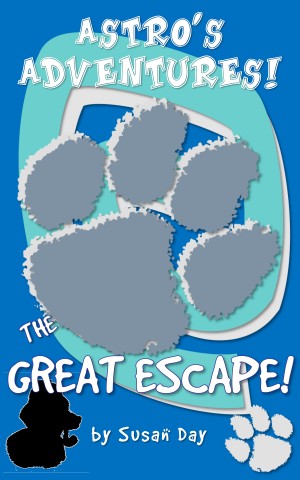 By Susan Day
Rated 4.00/5 based on 2 reviews
There is a special organisation responsible for the well being of all dogs. Its main goal is to make sure that all dogs are provided with a proper home, a nice warm bed and a cat to chase. This organisation is kept secret from every human being and operates, as you are about to see, right under our very noses… More
If you and your family love dogs you are going to love this fun children’s story. The characters are all based on real dogs and cats and, just like your pet at home, they will warm your heart. They are unique and a bit flawed but you’ll love them all the same.

The story is about a secret organisation exists without detection and operates right under our very noses. Its sole purpose is to save dogs from neglect. This is the first book in the Astro Adventure’s series and it will delight and entertain your family with its fast moving plots and funny storylines.

This tale of spies and mystery is full of twists and turns. The secret organisation is manned by a tunnel digging terrier who carries a diamond encrusted nail file. A large dog for which the complexities of door handles are a complete mystery and who, instead, opens everything with his head. As well as, a commando, khaki wearing Blue heeler who is armed with a hunting bone and a smell grenade. And that’s just to name a few!

In this great children's book, The Great Escape, we meet Astro, possibly one of the most spoilt dogs in the world, who calls on this secret organisation to save him from what he falsely assumes is imprisonment.

Commander Rocky, head of The Organisation, decides to teach Astro how lucky he is by taking him to the one place all dogs dread, The Check Out! It is a place where unwanted and rejected dogs are sent – never to be seen again! However, things don’t go to plan and Commander Rocky learns that below the shallow exterior of a grey shaggy dog is a brave, kind hearted hero.

Reviews:
“This is a delightful, enjoyable story for readers of all ages, from children to parents to grandparents and beyond. It is humorous, fast-paced, with well-developed characters that you will find adorable. And yes, the story has a message, a takeaway that is both inspiring and worthy of reflection after the reading is done...” – Thomas Baker

Susan is an Arts therapist, an author, canine behaviourist, and a storyteller. She lives with her family and dogs, in particular, Rocky the Border collie and Stella, the blind dog. She spends her time blogging, writing and illustrating; training and counselling dogs and being bossed around by the family cat, Speed Bump Charlie and his sidekick, Furball (see Dogs in Space).

Susan travelled around the world twice before she was seven years old. It seemed only fitting that the wonderful events she experienced and the places she visited on these journeys be recorded for history. Thus, her story telling skills began. Firstly, to Rupert Bear, her lifelong companion, and then to a host of imaginary friends and finally to her pet dog once the family finally set down roots in Australia.

Susan is passionate about children's literature and wants to inspire children to be better people and encourage them to follow their dreams. She runs workshops for children teaching them how to form the wonders of their imaginations into stories.

Susan lives in a small country town where there are more kangaroos than people. She shares her country property with four dogs, two cats, and one rescue guinea pig. More about her adventures are reflected in Clarence the Snake from Dunolly.

About the Series: Astro's Adventures

Meet the fun and zany dogs and cats in this wonderful children's series. Based on the lives of real dogs and cats, Astro's Adventures will take your middle grade chapter reader on exciting journeys across the world. Laugh out loud as you explore the mysteries that only Astro and the gang find themselves having to unravel. 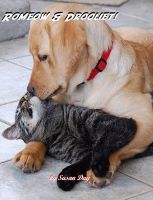 This is a great little story, with an excellent message about how important it is to care for your pets. It has an entertaining plot, as well as a fantastic cast of canine and feline characters. The only reason I don't give it the full five stars is because the cats and dogs are meant to be just like your average pet cats and dogs, yet they have physical capabilities that those animals could never have. Still, it was a wonderful story, and I look forward to reading

the rest of the series!

'The Great Escape - Illustrated!' is a children’s book which stands out through its humour and sense of character.

First in the series about Commander Rocky and his Organisation, a secret pack who rescue and care for ill-treated dogs, it features silly Astro, a dog who can’t see how lucky he actually is. Astro learns through working with a cast of characters including technologically-minded Hans, a Dachshund, and Digger (whose name gives away his role in the story) that he isn’t really a prisoner as he claims, but a much more fortunate dog than those the Organisation is called on to save from neglect.

Astro's adventure moves on swiftly and involves a sinister dog processing centre, as well as the Organisation’s feline enemies.

Well-equipped and resourceful though the Organisation may be, its members don’t abandon their canine natures. For example, a microchipped dog can always get in touch with the Organisation by turning round and round and dropping like a stone in its basket, which activates a hologram.

This is typical of Susan Day’s humour, which is clearly based on close observation of dogs and which doesn’t avoid a serious message about dogs’ need for a loving home and companionship.

You have subscribed to alerts for Susan Day.

You have been added to Susan Day's favorite list.

You can also sign-up to receive email notifications whenever Susan Day releases a new book.