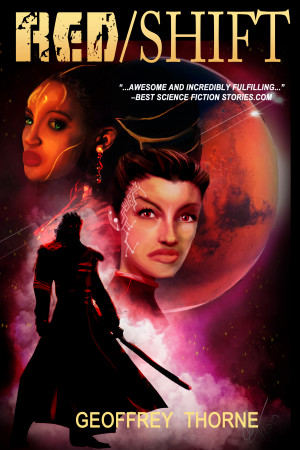 By Geoffrey Thorne
A dashing killer trying to outrun his past... A world-weary cop determined to close her most baffling case... A dying heiress desperate to find a cure for her disease...

When these stories collide on the same Martian night the results are deadly.

Geoffrey Thorne is an American novelist and screenwriter.

Thorne was born in the United States. After a successful career as a television actor, Thorne began writing professionally, winning Second Prize in Simon & Schuster's sixth annual Strange New Worlds anthology with his story "The Soft Room." He went on to publish more stories in several media tie-in anthologies as well as the Star Trek: Titan novel Sword of Damocles.

As a screenwriter, Thorne has worked with Kickstart Entertainment, Disney and Cartoon Network to develop several properties for television in both live-action and animated formats.

He was a writer for Law & Order: Criminal Intent, Ben 10: Ultimate Alien & Omniverse and seasons 3,4 and 5 of TNT's Leverage.

Thorne is the co-creator of PHANTOM CANYON, an audio drama from Pendant Productions set to debut in 2014.

Thorne is also a co-founder and writing partner of GENRE 19, a studio he formed with artist Todd Harris in 2008.

Reviews of Red/Shift by Geoffrey Thorne

You have subscribed to alerts for Geoffrey Thorne.

You have been added to Geoffrey Thorne's favorite list.

You can also sign-up to receive email notifications whenever Geoffrey Thorne releases a new book.