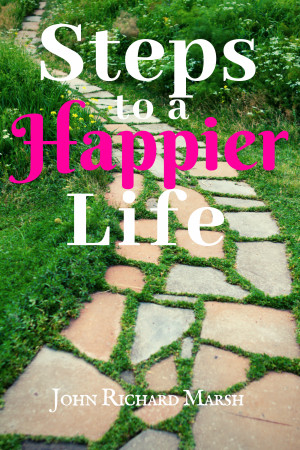 Steps to a Happier Life

By John Richard Marsh
100 Daily motivational and inspirational actions to entice you to jump on the path of happiness and success. More
"Steps to a Happier Life," a collection of principles for living, learned through adversity, failures, and yes, some lovely moments of tender happiness. Intended to inspire you, these ten simple keys will make you think, aid you in learning, and help you live a happier life.

John Richard Marsh (O’Brien) has earned a Ph.D. from the School of Hard Knocks which makes him more than qualified in the field of overcoming life&#39;s hardships and cruelties to finding success, joy, and happiness in life.

John’s parents divorced when he was eight and a half years old. His mother, suffering undiagnosed mental issues, kidnapped him and took John to Mexico where she changed his name to Roque John O’Brien. As a result, John wouldn’t answer when his schoolteachers called him Roque. She then moved John to Texas, where his mother met and married a man with three children. John’s stepdad was an alcoholic and an abuser. The stepdad only had an eighth-grade education and saw no need for John to continue his learning.

John began smoking at age thirteen and drinking beer at fourteen, and by tenth grade was asked to leave school. John was told on many occasions he wouldn’t amount to much. The family lived in abandoned houses, no water, electricity, and slept on mattresses on the floor. His stepdad forced him to sell their personal stuff on the side of the road in order to eat.

John worked menial jobs from age fourteen. At seventeen, he married his pregnant stepsister. Divorced at twenty-two with custody of their children, he moved to Santa Monica and lived as a single parent for eight years. Custody of his three children filled John with a determination to make a better life for them. He began his quest to improve himself and get a good education. It took him fifteen years to get his Associate Degree. Ultimately, John moved from menial jobs to become a mortgage broker.

Now retired in Southern California, an author and inspirational speaker, John shares 100 simple steps you can take to survive and thrive. He learned to rise above miserable circumstances and find happiness. You can, too.

Reviews of Steps to a Happier Life by John Richard Marsh

You have subscribed to Smashwords Alerts new release notifications for John Richard Marsh.

You have been added to John Richard Marsh's favorite list.

You can also sign-up to receive email notifications whenever John Richard Marsh releases a new book.