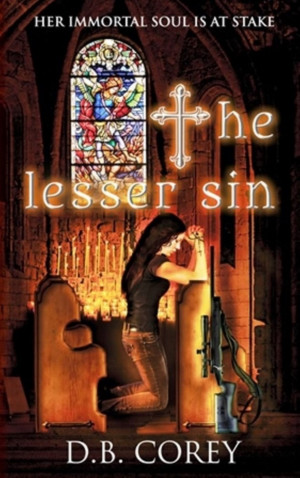 Hanna Braver, a total bad-ass, takes the law into her own hands to avenge her sister's murder. They don't die easily. More
Hanna Braver is a CIA sniper in the Afghan war. A devout Catholic, she prays for forgiveness with every enemy life she takes. But when the judicial system acquits her sister’s killer through back room dealings, she chooses to cross the line. In seeking absolution for a sin she has yet to commit, her childhood priest denies permission to commit premeditated murder. Furious with the priest, with God, and the Church, she ignores his counsel and sets out on a quest that will damn her for all time.

D.B. Corey lives in the Richmond suburbs with his wife Maggie and a pair of rescue dogs: Murphy, an oafish Chocolate Lab, and a lively little Beagle named Bailey. He is a NAVY veteran, and signed with Uncle Sam in the late '60s, flying aircrew aboard P-3 Orions, a maritime patrol squadron that chased down Russian subs during the Cold War. He began his writing career in his mid-fifties, and around 2013, Intrigue Publishing released Chain of Evidence. He self-published The Lesser Sin three years later, and has finished the second in the series, The Unforgivable Sin, with a projected release of 2019.

The Lesser Sin - Trailer
He murdered her sister and the courts let him go. Now CIA sniper Hanna Braver has a new mission. And a new target.

About the Series: Hanna Braver—Vigilante, Saint, or Sinner?

At What Cost, Vengeance?

Hanna Braver is a CIA sniper in the Afghan war. A devout Catholic, she prays for forgiveness with every enemy life she takes, but when her sister is murdered, and a corrupt legal system frees her killer, Hanna returns home for answers. What she learns rocks her devout Catholic upbringing and all she believes about America’s judicial system. To obtain justice for her sister, there is but one thing she can do. And the price is her Immortal Soul.

You have subscribed to alerts for DB Corey.

You have been added to DB Corey's favorite list.

You can also sign-up to receive email notifications whenever DB Corey releases a new book.