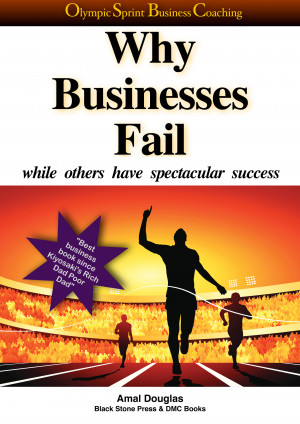 Why Businesses Fail: While Others Have Spectacular Success

The author was born in the UK of Jamaican parents and schooled in the UK until age thirteen when the family moved/returned to Jamaica. After high school, university, working in the family businesses (alternating between shopkeeper, bartender and bus conductor) and time as a very young civil servant. He returned to the UK as part of his own personal "second" removal".
After continuing his professional accounting studies he held various posts in that profession and ended up in "the City" (London's financial district). His first major solo business venture was as a travel and shipping agent in Paddington, and as an entrepreneur he has not looked back since.
As an author he has written several books and countless articles, and also wrote and produced the play Diary of a 'Son of Africa.' He is Founder of the Open Trade Network, an original member of the League of the Black Stone, a respected community leader and activist, and has served on the board of many charitable and social organisations and enterprises. His two most well know training programmes are Seven Secrets of Successful Fundraising and the Olympic Sprint Business Coaching.

You have subscribed to alerts for Amal Abdalhakim-Douglas.

You have been added to Amal Abdalhakim-Douglas's favorite list.

You can also sign-up to receive email notifications whenever Amal Abdalhakim-Douglas releases a new book.