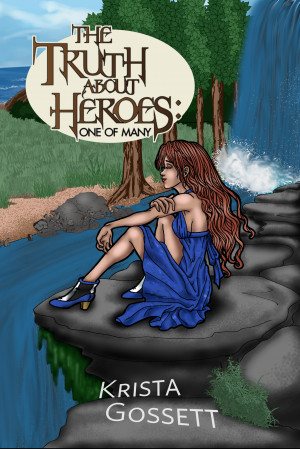 The Truth about Heroes: One of Many

Rated 3.00/5 based on 1 reviews
A series of short stories following the tales of nine people affected by the beginnings of war and the volatile powers barely holding the world together. Filled with action, lore, Gods, magic, and human flaws that question the perception of good and evil. Book 1 of a 9 book series, released whenever the illustrations are complete for the print version. More
The story starts with Rienna, the daughter of the Commander of the Royal Army, as her life is turned upside on her wedding day. On her quest for revenge, she meets other people similarly upended from their lives by the same malevolent forces. Starting from a series of short stories, this epic fantasy delves into who heroes are as people, the imperfection of power, and the precarious balance of good and evil. Follow 9 average people on their quest to make sense of a world of magic, might, and mistakes.

This is an adult series that does explore disturbing violence and sexual themes as part of the complexity of character development and war.

Krista Gossett is a professional graphic artist/illustrator as well as an author. Her first love was comic book art and video gaming which helped her develop an interest in creating her own worlds. Krista has two degrees in graphic design and would love to teach someday. Artists never retire. She also raises her two awesome nephews and hopes to always be a role model that encourages them to follow their own dreams as well.

I am here to tell the truth about Book One of The Truth About Heroes. First off - it isn't really a series of short stories - it's more like a novel. The formatting of the ebook edition is very, very professional and meets the highest standards. The editing seems to have also been quite good for the most part - though there are a few errors. Once, early in the book, the term "spitting image" is used. Actually, the term is "spit and image" when used appropriately. Another time, later on in the book, "loathe" is used when "loath" is clearly the word that the author should have intended to employ.

The story is very fast-paced, yet often quite detailed at the same time. This is a story trait that I quite enjoy - especially in epic fantasy (which is what I would consider this book to be). There is a problem with the action and combat scenes. Put bluntly - they are weak. The action is often glossed over without much detail or description of what occured. There were even a handful of occasions where the author only lets the reader know that there was a fight and that the protagonists won the skirmish without telling the reader anything else whatsoever. Also - the protagonists win easily in almost every combat situation in this book. There was never a sense that any of the protagonists were in real danger, despite the fact that two of them did end up dying. The sense of the protagonists being in mortal danger just never was properly conveyed anywhere in this book.

This book has well-developed and deep characters but also has a lot of silly and almost pointless sex scenes. This story is very good when it stays focused - but it also goes into way too many side stories about past events at inopportune moments. My final verdict is that this book is a "mixed bag" as far as where it takes the reader. It is worth reading and can be entertaining - but the author has a long way to go before she can become a master of her craft.

You have subscribed to alerts for Krista Gossett.

You have been added to Krista Gossett's favorite list.

You can also sign-up to receive email notifications whenever Krista Gossett releases a new book.