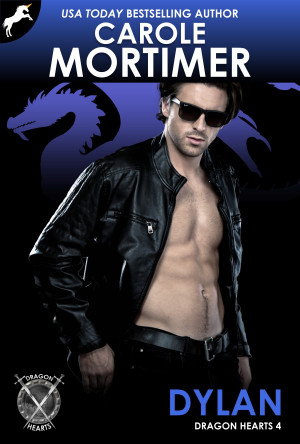 By Carole Mortimer
Waking up in a human hospital isn't the worst thing that's ever happened in Dylan, but as a dragon shifter it was certainly unexpected. Opening his eyes to find the human doctor examining him was also his fated mate was even more of a surprise. But Holly Wilson already has enough problems of her own, without a slightly deranged patient insisting she's his fated mate and he wants to bite her! More
DYLAN is the 4th book in USA Today Bestselling and Amazon #1 Bestselling Indie Author, Carole Mortimer’s, paranormal series, DRAGON HEARTS.

Author’s Note: Beware of very sexy alpha dragon shifters on the hunt for their fates mates!

Waking up in a curtained cubicle in a human hospital wasn’t the worst experience Dylan had ever had in his centuries-long existence, but it was certainly not something he would ever have expected to happen. As a dragon shifter, human ailments didn’t bother him, and if he was ever injured then transforming into his dragon would heal him. Besides, he and his brothers had always avoided human hospitals because the doctors there had a habit of carrying out tests and asking for X-rays that would clearly tell them the Pendragon brothers weren’t human.

Opening his eyes to find his fated mate bending over him, his human fated mate, was even more of a shock. Yes, three of his brothers had found their fated mates in the past year, and they had all been human, but Dylan had never thought it would happen to him too.

Holly Barnes wasn’t only human, the name tag attached to her white coat said she was also a doctor. And the singular most beautiful woman Dylan had ever seen, with her glossy auburn hair, dark green eyes, and voluptuous body.

A & E doctor, Holly Wilson, didn’t know what to make of her newest patient. Apart from the fact he was the most gorgeous and sexy man she had ever set eyes on. He was also extremely tall, over six and a half feet of dark and dangerous bad boy, if her assessment was correct. But she hadn’t been able to find any visible injuries on him when she examined that ripped and toned body, no head injury or anything else to explain why he had been unconscious when he was brought in to A&E. He looked perfectly normal to her, almost as if he was sleeping, rather than injured.

Having him suddenly raise his eyelids and look at her with glittering blue eyes, that didn’t appear fevered or pained, but gazed up at her as if she was Christmas, birthdays, and every other holiday celebration combined, was more than a little unnerving. Even more so was having his fingers curl like steel bands about her wrist and have him call her his fated mate.

Holly had enough problems in her life right now without some crazy man telling her she now belonged to him. Even if he did look like a Greek or Roman god and made her knees go weak.

Until Dylan knew what had happened to put him in the human hospital in the first place, he knows he shouldn’t even think about claiming Holly as his mate.

Staying away from his fated mate altogether proves impossible, but is Dylan putting Holly’s life in danger by continuing to seek her out at every opportunity?

Carole Mortimer has written over 230 books, in paranormal romance, contemporary romantic suspense, and Regency. She became an indie author in 2014. In May 2017 she received a Career Achievement Award from Romantic Times. She is the Recipient of the 2015 Romance Writers of America’s Lifetime Achievement Award. An Entertainment Weekly Top 10 Romance Author—ever. 2014 Romantic Times Pioneer of Romance. She was also recognized by Queen Elizabeth II in 2012, for her “outstanding service to literature”.

About the Series: Dragon Hearts

Dragon Hearts is my new paranormal series, set in the Welsh mountains, and featuring dragon shifters.