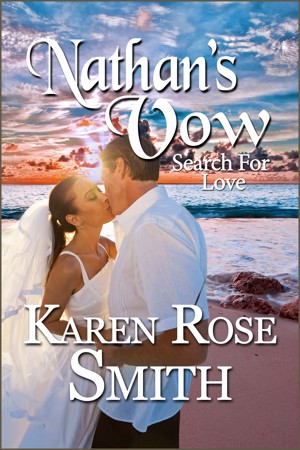 Book 1, Search For Love Series
Nathan Bradley's ex-wife disappeared with his daughters. Psychic Gillian Moore has a gift that could find them. Will Gillian and Nathan's potent attraction be a roadblock that will prevent her gift from leading her to his children? More
Book 1, Search For Love Series
When Nathan Bradley's ex-wife disappears with his daughters, he does everything in his power to find them. His private investigator hits a wall and suggests Nathan convince psychic Gillian Moore to help him. At first, Gillian is reluctant. She'd come to L.A. from Indiana to get lost in the crowd...to escape her gift that sometimes seemed more like a burden. As a manicurist, she is learning to relax again and enjoy life. But when Nathan makes his plea and shows her a picture of his girls, she knows she must help him. However, the spark and sizzle between them becomes a fascinating impediment to her progress. Gillian, who was once burnt by a divorced dad, tries to keep her perspective. But Nathan is a force to be reckoned with. Will her gift lead her to love or heartache once again? (Originally published with Silhouette Books as Adam's Vow.)
Available ebook formats: epub mobi pdf rtf lrf pdb txt html
First 10% Sample: epub mobi (Kindle) lrf more Online Reader
pdb
Price: $2.99 USD
Buy Add to Library Give as a Gift
How gifting works
Create Widget
Tags: love beach relationships children paranormal france california romantic ebook divorce parents couple dad psychic contemporary romance sensual romance emotional romance karenrosesmith
About Karen Rose Smith

Award-winning author Karen Rose Smith was born in Pennsylvania. Although she was an only child, she remembers the bonds of an extended family. She and her parents lived with her grandfather and aunt until she was five when her parents built a house next door. Since her father came from a family of ten and her mother, a family of seven, there were always aunts, uncles and cousins visiting on weekends. Family is a strong theme in her books and she suspects her childhood memories are the reason.
As a teenager, music became as important to Karen as reading. The Beatles were her favorite group. But she and her cousin took their first sojourn into writing by collaborating on a script for the MONKEES television program. They sent that script to every concert venue where the group appeared that summer!
In college, Karen began writing poetry and also met her husband to be. They both began married life as teachers, but when their son was born, Karen decided to try her hand at a home-decorating business. She returned to teaching for a while but changes in her life led her to writing romance fiction. Now she writes full time.
Her first romance was published in 1992; her 80th romance will be published in 2013. A winner of New Jersey's Golden Leaf Award in Short Contemporary Romance, Colorado Romance Writers Award Of Excellence for short contemporary, as well as the Phoenix Desert Rose Chapter's Golden Quill for Traditional Romance, she has also been honored with Cataromance.com's award for Best Special Edition. Her romances have made both the USA TODAY list, and the Amazon Romance and Contemporary Romance Bestseller lists.
Karen's SEARCH FOR LOVE ebook series will soon be available in audiobooks as well as ebooks. She has added book 7, HER SISTER, a contemporary women's fiction novel to the series. As well as indie publishing, she writes Harlequin Special Editions and will see the debut of a mystery series for Kensington in December 2013. Readers can follow her on Facebook (Search--Karen Rose Smith)or on Twitter @karenrosesmith. They can also contact her through her websites at www.karenrosesmith.com and www.karenrosesmithmysteries.com. She welcomes interaction with her readers and would love to chat about plotlines, titles, emotions, heroes, heroines, music, books, gardening, cooking, or anything else readers deem noteworthy!

Also in Series: Search For Love

You have subscribed to alerts for Karen Rose Smith.

You have been added to Karen Rose Smith's favorite list.

You can also sign-up to receive email notifications whenever Karen Rose Smith releases a new book.