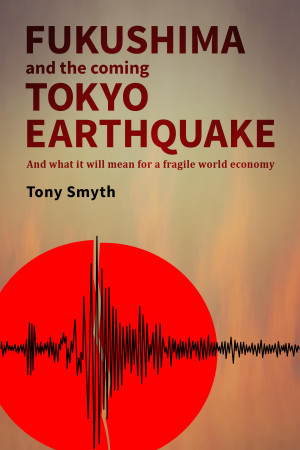 Fukushima And The Coming Tokyo Earthquake: And What It Will Mean For A Fragile World Economy

The first section of the book tells the story of how a country that suffered atomic bombing ended up obtaining a third of its electricity from nuclear power, despite having the misfortune to be located in the most seismically active zone in the world. It then depicts the sequence of what happened in March 2011 after the tsunami struck.

Next, the book details recent peer-reviewed studies about radiation and its effect on human health. A following chapter reveals the full costs of nuclear power– an energy source that never comes in on budget and is incredibly expensive. The final part of this section of the book describes the inadequacy of storing spent nuclear fuel once a nuclear power station has been decommissioned.

The latter half of the book adopts a larger frame or viewpoint, and looks at the use of nuclear and renewable energy in the context of world climate change and the widespread use of fossil fuels.

The final section of the book depicts a coming Tokyo earthquake and its consequences. A big earthquake in or near Tokyo is overdue. They usually happen every sixty to seventy years, yet the last one was in 1923. The author asserts that Japan will have to repatriate much of its treasury bonds which are held in the United States.The tsunami and meltdowns of 2011 represent the most expensive natural disaster in history. Even though Japan is the third biggest economy in the world, because of an estimated debt from the tsunami and Fukushima meltdowns of at least $500 million and weak indebted economy, it will struggle to pay this amount. The most obvious way to pay for rebuilding will be to sell stocks and treasury bonds held in the United States.

An earthquake striking Tokyo will hit right at the nerve centre of the country. All political and economic power is concentrated there.The headquarters of many global 500 companies, as well as all the powerful bureaucracies so vital to the country, are located in one central section of the capital. Most of Japan’s imports and exports are dispatched through Tokyo Bay. After a big quake, this area is likely to be crippled for some time. Moreover, much of Tokyo’s manufacturing takes place on reclaimed land in the Bay – land which tends to liquefy in a big quake.

This book argues that because of the fragile situation of world economies since 2008 (Lehman Bros etc), and the heavily indebted state of Japan’s finances post-tsunami/Fukushima, the only way that Japan will appeal to finance the enormous amount of post-quake rebuilding is to repatriate its investment in US government bonds and securities. This will have an immediate knock-on effect on the American economy and, soon after, most of the world’s economies.
Available ebook formats: epub mobi pdf lrf pdb txt html
First 20% Sample: epub mobi (Kindle) lrf more Online Reader
pdb
Price: $5.00 USD
Buy Add to Library Give as a Gift
How gifting works
Create Widget
Tags: japan climate change tokyo economics earthquakes renewable energy fukushima us treasury bonds energy transition hitech components
About Tony Smyth

Tony Smyth graduated from Northumbria University in 1976 with a fine arts degree. During his time of study he developed an interest in Japanese and Japanese culture and art, particularly that influenced by Zen. After working in graphic design for two years, he traveled across America and arrived in Tokyo in 1980. He has lived in Japan for thirty seven years. He first studied Japanese language, before switching to shiatsu and acupuncture, receiving a diploma in shiatsu in Tokyo, and a master level acupuncture diploma in Beijing.

He has traveled extensively, particularly in Asia. Currently, he teaches English at the Ministry of Foreign Affairs and at several schools, is a Christian wedding celebrant, and has a private practice doing Neuro Linguistic Programming and hypnotherapy for the foreign community in Tokyo. He has written articles for the Tokyo Journal and other Japan-based blogs .

Fukushima and the Coming Tokyo Earthquake is his first book. A sequel to this book will examine the key role of energy and depleting resources in a world economic system that is dependent on ever-increasing debt and exponential growth

Reviews of Fukushima And The Coming Tokyo Earthquake: And What It Will Mean For A Fragile World Economy by Tony Smyth

You have subscribed to alerts for Tony Smyth.

You have been added to Tony Smyth's favorite list.

You can also sign-up to receive email notifications whenever Tony Smyth releases a new book.