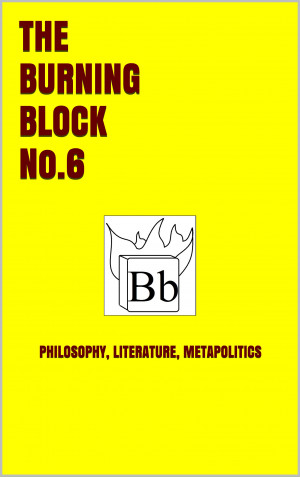 The Burning Block No.6

By Shane Eide
In issue 6, questions of existence are considered aphoristically with varying degrees of skepticism and hope. More
In Issue 6, questions of existence are considered with and against the work of others who have, in their respective ways, dealt with this issue. Nietzsche's theory of nihilism is examined, along with the implications of Michelstaedter's theory of persuasion and rhetoric considered in light of his suicide, and also, a piece which tries to locate the relevance of developing Max Stirner's ideas beyond the domain of mere egoism.
This issue starts with a piece titled 'Aphorisms and Aggravations,' in which the horrors of the Manson Family are considered as a microcosm for society, politicized eastern religion resembles fascism, makeup hides rather than enhances sexual value and spiritualities can be purchased like any other atomized commodity for the sake of comfort.
Available ebook formats: epub mobi pdf lrf pdb txt html
First 20% Sample: epub mobi (Kindle) lrf more Online Reader
pdb
Price: $3.99 USD
Buy Add to Library Give as a Gift
How gifting works
Create Widget
Tags: literature spirituality hope philosophy essays existentialism nihilism metapolitics
About Shane Eide

Shane Eide is a part-time hermit, part-time flaneur, which means that he is either spending time on literary pursuits or taking walks and thinking about literary pursuits​. He lives in a little room walled with books and sleeps near a big desk, on which he doesn't write since all the quiet is too distracting. He usually goes someplace noisy in order to write as much about fiction as he writes fiction.

He's been writing fiction since he was about 11, in which time he's written several novels that he never intends to publish and which no one will ever see, and several others that he wants to publish that he's read out loud to his gold fish. He's been writing what he supposes would be called non-fiction ever since he wrote "Shane was here," in easily erasable pencil on a desk in junior high.

You can read his essays and occasional fiction at his blog, www.emergenthermit.com

About the Series: The Burning Block

A magazine devoted to literature, satire and philosophy.

Also in Series: The Burning Block

Reviews of The Burning Block No.6 by Shane Eide

You have subscribed to alerts for Shane Eide.

You have been added to Shane Eide's favorite list.

You can also sign-up to receive email notifications whenever Shane Eide releases a new book.