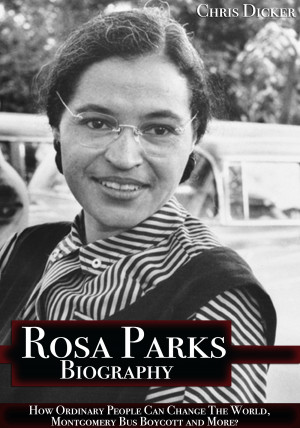 Rosa Parks did not pursue money or fame. She had a modest life, it suited her quiet personality. She lived her life being of service to others, to her family, and to the entire mankind. She was one of those people who changed the United States as a nation.

Rosa Parks helped the African Americans to have equal rights related to work, business and education. As a result of her civil rights activism, in 1964 the Civil Rights Act was passed, a legislation which emphasized on black equality. Without a doubt, Rosa Parks' fight paved the way to a more liberal society.

President Bill Clinton recognized her great merits and awarded her the Presidential Medal of Freedom in the Oval Office on September 14, 1996. Through all her acts and ideas, she helped make the world a better place.

If you want to learn more about Rosa Parks, who she was as a person, how she lived, and more importantly, how an ordinary person can make a difference and change the world, this biography is for you.

I love writing biographies about celebrities (dead or alive), because there's so much to learn from those people. Success leaves clues, so I study and write about successful people.

About the Series: Biography Series

Here you'll learn about different celebrities or famous people (dead or alive). Get inspired by some of the most influential people of all time.

You have subscribed to alerts for Chris Dicker.

You have been added to Chris Dicker's favorite list.

You can also sign-up to receive email notifications whenever Chris Dicker releases a new book.