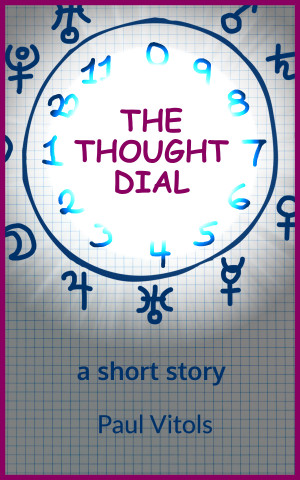 By Paul Vitols
When sixteen-year-old John Pulkis loses the concert tickets that were to give him the courage he needs to ask Sue Nielsen for a date, he considers desperate remedies.

Loosely based on real-life events in Vancouver in 1975 and dedicated to the memory of an inspiring high-school teacher, The Thought Dial is a reminder that teenage life can be passionate—and the stakes can be high. More
Sixteen-year-old John Pulkis faces disaster: he’s got two tickets to the Doobie Brothers concert at the Vancouver Coliseum in eight days—and he’s lost them! It’s not about the money, although that was plenty—fourteen dollars, a month’s allowance. No, he needs those tickets, for only they will give him the courage to do what he otherwise cannot: ask Sue Nielsen for a date.

As a would-be astronomer, he decides to apply the scientific method: a systematic search, complete with graph paper. But as the tickets continue to elude him, his thoughts turn dark. He starts to wonder what the options are for cowards like himself, and remembers his socials teacher talking to the class about suicide. . . .

Loosely based on real-life events in Vancouver in 1975 and dedicated to the memory of an inspiring high-school teacher, The Thought Dial is a reminder that teenage life can be passionate—and the stakes can be high.
Available ebook formats: epub
Price: $0.99 USD
Buy Add to Library Give as a Gift
How gifting works
Create Widget
Tags: short fiction short stories shortstory short ebook short ebooks short novella fiction shorts fictionlove fiction ideas short reads
About Paul Vitols

Paul Vitols ("Vee-tolls"--Latvian for "willow") was born in 1959 in Vancouver, Canada, to two refugees who met at an encyclopedia salesmen's Christmas dinner.

He showed an early obsession with letters and words, which manifested in, among other things, the defacing of some of his father's books. In school he turned to filmmaking, and competed in provincial and national student film festivals. Nonetheless, the career he imagined for himself was in space science. But by age 20 he realized that, for better or worse, he was a writer, and he dropped out of university.

Paul's love of film led him into script-writing, and in 1992 he, with writing partner Warren Easton, broke through with a children's TV series called "The Odyssey," about a comatose 11-year-old boy trapped in an alternative world run by children as a police state. The show, known for its edge and humor, received many international awards and was broadcast in more than 50 countries.

At the same time, Paul was also at work on a novel, a literary thriller called "Truth of the Python," in which a hypnotherapist inadvertently regresses a neurotic young client to a past life as the Greek philosopher Pythagoras. Paul, after some close calls in the world of print publishing, finally brought it out as an e-book in 2011.

His current project is The Age of Pisces, an epic of the birth of Christianity, which he is calling a "literary series"--the e-book equivalent of a TV series. Episode 1, "The Mission," is in development.

Along the way, Paul has also practiced journalism, copy writing, editing, and technical writing. Indeed, to keep writing and creating he has also begged and borrowed, but not stolen--yet.

He lives with his wife Kim in North Vancouver, British Columbia.

Reviews of The Thought Dial by Paul Vitols

You have subscribed to alerts for Paul Vitols.

You have been added to Paul Vitols's favorite list.

You can also sign-up to receive email notifications whenever Paul Vitols releases a new book.