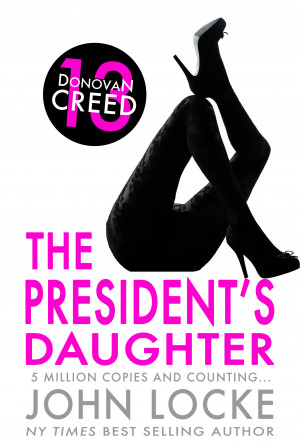 “Best Creed book ever! A joy from start to finish.”

“Locke’s ability to make me turn the pages kept me up the whole friggin’ night. Damnit!”

“If you like Donovan Creed, you’ll love this kickass novel, The President’s Daughter. It’s Creed and Callie at their best. I loved it!”

“Like all John’s books, this one is smart, sassy, and keeps you guessing throughout. He lulls you into thinking you know what’s going to happen next, but you never do. And it’s not your fault. It just proves you’re sane, and he’s not. I see where readers are always asking how he comes up with this stuff. Personally, I don’t want to know!”

New York Times best-selling author John Locke holds a Guinness World Record for eBook sales and is the international best-selling author of 38 books in six different genres. He is the 8th author in history to have sold one million eBooks on Kindle, which he achieved in only five months. Locke has had four books in the top ten at the same time, and eight books in the top 43 at the same time, including #1 and #2. Foreign rights to his books have been purchased by the world’s top publishers. Translations include Russian, Spanish, Catalan, Italian, Japanese, Polish, Hungarian, and Lithuanian, with more on the way.

Hitman, Donovan Creed, finds the billion dollars in his Swiss bank account missing, and his wife tries to kill him. To add insult to injury, a mobster offers him $1500 to kill a dog that bit him. Eventually, the president’s chief of staff offers him eight million to kidnap president’s daughter. Well, a guy has to make a living, so he takes the job, only to discover that this has been in works for years, and a veritable troop of look-alikes and body doubles are on the government’s payroll. Creed’s overly complex plan evaporates when the president’s daughter voluntarily lets herself be kidnapped.

Okay, it’s a silly story. Now, I’m not one to criticize a silly story. I may have been guilty of writing one or two myself. The President’s Daughter, however, is a bit much. Creed and his partner, Callie, have sex with and kill everyone they meet. The body count is astronomical, and I only recall disposing of two bodies, yet no one seems too concerned to arrest them. The wackiness aside, this book has some issues that don’t appeal to me. It bounces back and forth from past tense to present tense, and it shifts viewpoints from first person narration by the main character to third person narration by unimportant characters. It has its bright moments and a few flashes of humor. Mr. Locke is not shy about claiming some pretty impressive credentials, including million-seller status. This is apparently true. That worries me about the nature of the reading public, but I can’t fault his success.

You have subscribed to alerts for John Locke.

You have been added to John Locke's favorite list.

You can also sign-up to receive email notifications whenever John Locke releases a new book.