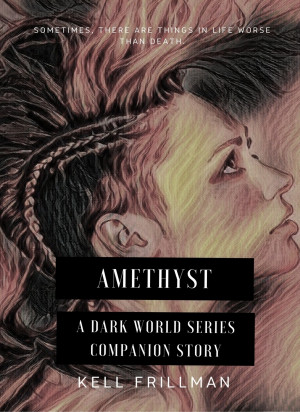 Amethyst, born in 2058, was forever a disappointment for not possessing the advanced gene her mother had been trying to alter in future generations. Raised in the isolated underground complex that contained what was left of humanity after the invasion of 2022, Amethyst was expected from a young age to bear the burden of The Co More
"Amethyst" is a companion story to Kell Frillman's Dark World Series.

Amethyst, born in 2058, was forever a disappointment for not possessing the advanced gene her mother had been trying to alter in future generations. Raised in the isolated underground complex that contained what was left of humanity after the invasion of 2022, Amethyst was expected from a young age to bear the burden of The Complex's darkest secrets.
At the age of twenty, a teenager is discovered to have the advanced gene that Amethyst's mother, SueLee, and her scientists had been trying to achieve. Amethyst must make a choice. Will she finally join her mother's obsession with unlocking the dormant abilities of the human mind, or will she help the teenager, Ruby, expose the lies of Doctrine?
Download: epub mobi (Kindle) pdf more Online Reader
lrf pdb txt
Price: Free! USD
Add to Library
Create Widget
Tags: short story post apocalyptic apocalyptic dystopian dystopian ya dystopian teen dystopian life
About Kell Frillman

Once upon a time, there was a very strong-willed twelve-year-old who spent four months of her pre-teen life writing her very first novel. It centered around a selfish, anthropomorphic cat who decided to take over a forest kingdom and reign all of the creatures that resided in it. I went for the classic underdog hero motif, inventing a brave little mouse who decided to gather an army and fight against Sarminera’s tyranny. What can I say, at the time I was obsessed with Brian Jaques novels and who can deny that eventually, cats will take over the earth? Come on, you all know its true. You’ve seen the way cats stare us down with large, dilated pupils; patient, calculating, waiting for the perfect moment to execute their flawless plans of tyranny…
I digress.
Barnes and Noble trips with my father were among my favorite things to do at that age, I would always end up with handfuls of novels meant to be read by people far older than myself at the time and somehow I would manage to convince my father that I needed every single one of them right at that moment or I would suddenly keel over and succumb to mysterious and finalizing death. I also swore that someday, I would be the author of a handful of books that would rest on those very shelves. Some people are simply born with a calling; a special kind of confidence and passion that overwhelms them with purpose. I’ve known since my pre-teen years that writing has always been my number-one calling, not just as a career choice but as a coping method for all of the challenges and confusions of everyday life. I may have been coy and dramatic when I spent my pre-teen years convincing my father that books were as important to me as air, but even as an adult, I repeat that same passionate statement with honesty and no ulterior motive.
I love to write YA fiction, and right now I am immersed in a YA dystopian, post-alien invasion serial novel called “Dark World.” My dramatic, character-driven tale comes from the point of view of a young captive of The Complex, following her choices, her emotions, her failures and her successes as she helps to uncover a government conspiracy in order to free people from the tyranny they have been victimized by for almost a century.
In addition to my fictional endeavors, I blog about my passions, as well and my thoughts and views on various topics. I don’t expect everyone to agree with all of my views but I do ask that my blog is always respected as my personal place to share my thoughts.
I write to live, and I live to write. Get to know me and maybe we can be friends.

You have subscribed to alerts for Kell Frillman.

You have been added to Kell Frillman's favorite list.

You can also sign-up to receive email notifications whenever Kell Frillman releases a new book.