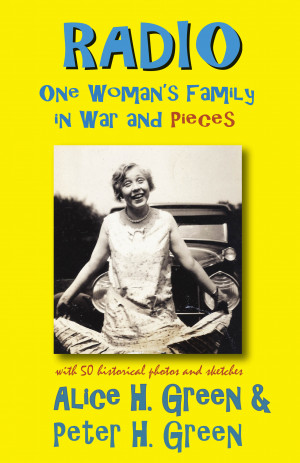 Radio: One Woman's Family in War and Pieces

“When Ben went off to war...It was obvious I had to go to work. But with all these new duties and two small children under my wing, what could I do? There was a labor shortage. Sure. But was it so bad that some desperate employer would pay handsomely for two hours of a frazzled female’s time after a hard day? At say, fifty dollars a week?”.

PRAISE FOR ALICE AND PETER GREEN’S WORLD WAR II BIOGRAPHICAL MEMOIR
"This is a wonderful gift book. Alice Green’s writing is fresh and at times laugh-aloud funny, parts of it reminiscent of Cheaper by the Dozen. Thornton Wilder instructed Alice in creative writing. I recommend this book to all readers who enjoy a good laugh. The section “We Bought a Crooked House” was hilarious." --Paula B., online reviewer.

World War II was a tipping point for social change in America. With their men at war, nineteen million women joined the work force. Radio, the first instantaneous mass medium, provided daytime serial drama, entertainment and news, including pronouncements of world leaders and terrifying war reports, as President Roosevelt used the new medium to rally the nation to arms and win the war.

Alice Green’s lost and recently found eyewitness accounts of her childhood, her own war, the Golden Years of Radio and the postwar housing shortage are told from the light-hearted viewpoint of a shy, youngest child, who learns she can make even the stormy and outrageous characters in her own family laugh. With a little help from her son, who (just barely) lived to finish it, her story stands for unsung American women in war and survives as Alice’s triumph.
Available ebook formats: epub mobi pdf lrf pdb txt html
First 20% Sample: mobi (Kindle) lrf pdb Online Reader
Price: $4.99 USD
Buy Add to Library Give as a Gift
How gifting works
Create Widget
Tags: soap opera world war 2 military families women at war radio history women in love humor family womens equality u s cultural history
About Peter H. Green

In his career as an architect, Peter Green has seen enough close calls, suspicious acts and outright skullduggery to lure him into writing mysteries. In Peter’s curiously autobiographical debut novel, Crimes of Design, architect Patrick MacKenna, discovers the body of the staunchest advocate for his controversial flood-protected dream project in the site’s storm water pumping station during a record flood in St. Louis. He is forced to become an amateur sleuth to save his career, his family and his very life.

A writer, architect and city planner reared in a family of journalists, Peter found his father’s 400 World War II letters, his humorous war stories, his mother’s writings and his family’s often hilarious doings too good a tale to keep to himself, so he launched a second career as a writer. After years of architectural work and proposal writing for his design firms, he went back to Washington University to study creative writing with such accomplished authors as Catherine Rankovic, Robert Earleywine and Rick Skwiot, resulting in the release in 2005 of his biographical memoir on the often hilarious antics and serious achievements of his dad’s World War II adventure, Ben''s War with the U. S. Marines (2005, 2014) and his mother's humorous biographical memoir, Radio: One Woman's Family in War and Pieces.

Peter earned a Certificate in Creative Writing and Bachelor of Architecture degree from Washington University, St. Louis, and a B.A. from Yale University. He is Vice President, Programs, for St. Louis Writers Guild, a member of Sisters in Crime, St. Louis Publishers Association and Missouri Writers Guild. Among design organizations, he is a member of the American Institute of Architects, American Planning Association, American Institute of Certified Planners and past St. Louis Post President and Fellow of the Society of American Military Engineers. He lives in St. Louis with his wife, Connie, and has two very young married daughters and three small grandchildren. The life and times of the last pet he owned. “The Night We Ruined the Dog,” can be found on his website, www.peterhgreen.com .

You have subscribed to alerts for Peter H. Green.

You have been added to Peter H. Green's favorite list.

You can also sign-up to receive email notifications whenever Peter H. Green releases a new book.