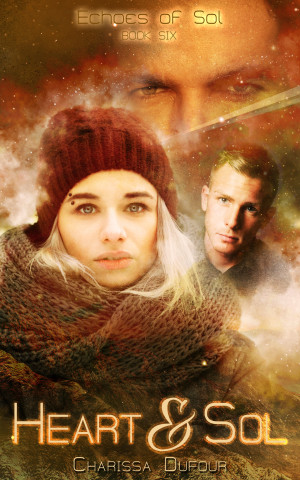 My journey to become a writer began in 8th grade, when I was diagnosed with Chronic Fatigue Syndrome and pulled from school to recover. During this time, I was left alone for hours on end and it was then that I discovered new friends within the pages of books. I also learned the blessing of creating my own friends by writing down the stories that plagued my lonely mind—as demented as that sounds. Therefore at the ripe age of fourteen, I wrote my first novel. It sucked! But I kept going and now I am an Indie Author with numerous books out. I never imagined that first horrible novel about a man who crash landed on his long lost home world would turn into a lifelong passion.
I now live in Chicago, IL with my amazing husband and two rambunctious kittens, Groot and Rocket.

About the Series: Echoes of Sol

When space freighter pilot Calen Macleef accidentally wins Larissa “Bit” Earnest in a lucky hand of poker, his main concern is what his gruff and uncompromising brother Jack will say about it. Jack Macleef is the captain of the ship in a world where space travel has only recently become the norm and space piracy abounds.

Also in Series: Echoes of Sol

Reviews of Heart and Sol by Charissa Dufour

This woman just can't seem to stay away from trouble. Although this time, the captain should have listened to her. Hostile takeovers, hypothermia, reluctant parenting and uncomfortable inner monologues - it's all here.

You have subscribed to alerts for Charissa Dufour.

You have been added to Charissa Dufour's favorite list.

You can also sign-up to receive email notifications whenever Charissa Dufour releases a new book.