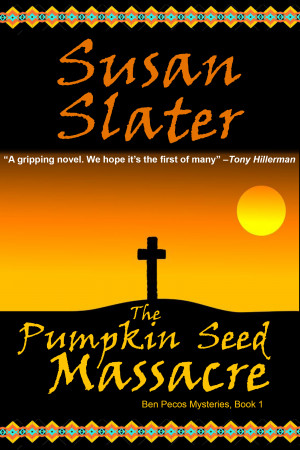 One of the victims, the powerful tribal governor, had made powerful enemies, and Ben suspects his murder was premeditated—but that doesn't explain the insidious killer now stalking the innocent. Undaunted, Ben digs deep into the motives of power and greed to root out a killer whose deadly agenda is spiraling out of control.

“This is a wonderful book with loveable heroes.” –Library Journal

“Solid characters, fascinating atmosphere, and authentic setting—The Pumpkin Seed Massacre is a book you will enjoy. Ben Pecos is a star in the detective firmament. I predict a big future for Susan Slater.” – Barbara D’Amato

Kansas native Susan Slater lived in New Mexico for thirty-nine years and uses this enchanting Southwest setting for most of her mystery novels. Her Ben Pecos series reflects her extensive knowledge of the area and Native American tribal ways. As an educator, she directed the Six Sandoval Teacher Education Program for the All Indian Pueblo Council through the University of New Mexico. She taught creative writing for UNM and the University of Phoenix.

The first in this highly acclaimed series, The Pumpkin Seed Massacre, reached Germany’s bestseller list shortly after its initial publication as a German translation. Original print versions of the first three titles were outstandingly reviewed in nationwide major media.

In July, 2009, Susan made her first foray into women’s fiction with 0 to 60, a zany, all too true-to-life story of a woman dumped, and the book was immediately optioned by Hollywood.

Late 2017 and 2018 brings a new era to Susan’s storytelling. Secret Staircase Books is releasing newly edited versions of her entire Ben Pecos series in paperback, and brings the series to a whole new set of readers for the first time in all e-book formats.

Now residing in Florida with her menagerie of dogs and canaries, Susan writes full time and stays busy in community theatre and other volunteer projects. Contact her by email: susan@susansslater.com

About the Series: Ben Pecos Mysteries

Native American psychologist Ben Pecos lives and works in New Mexico.Traveling between the northern pueblos and reservations, he becomes embroiled in a new mystery in every location.

A great who-dunnit and why set in a pueblo of New Mexico. The story grows, much like the deaths. Loved how the Native American beliefs and traditions were seamlessly integrated into the modern lives of the peublo village. The little twists were satisfying while the , and I’ll be looking out for more in this series.

You have subscribed to Smashwords Alerts new release notifications for Susan Slater.

You have been added to Susan Slater's favorite list.

You can also sign-up to receive email notifications whenever Susan Slater releases a new book.