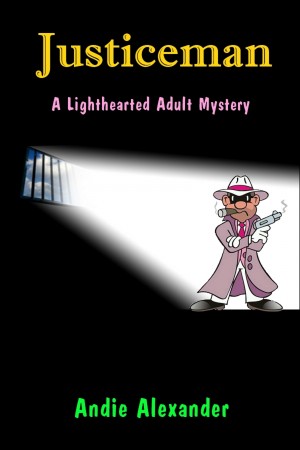 By Andie Alexander
Rated 5.00/5 based on 1 reviews
Aspen Dove knows how to get what she wants from every man—until she meets her match in FBI Agent Evan Blaze. While trying to get a story for a doomed newspaper about a local vigilante killer named Justiceman, Aspen becomes the target of not only the mob, but some vigilante bikers with temporary pony tattoos on their cheeks, a serial killer lacking a few brain cells, and Justiceman himself.

Andie writes mysteries and adventures, and also writes as all the author names on SweetTaleBooks.com. Writing is escapism, at its finest.

Meet Aspen Dove, part time freelance journalist and part time truck driver who gets herself tangle up with the mob, the FBI and a killer who's supposedly out for justice with the murders thus the name "Justiceman". There was a lot of hilarious things that happened or were spoken making this a delightful read. I'd love to see more of Aspen in another book as a sequel. I never had an idea who the killer was until Aspen herself knew it so was a great mystery story with tons of twist and turns and lots of action. I would have loved to seen this as a movie it was so different and funny for a murder mystery.

You have subscribed to alerts for Andie Alexander.

You have been added to Andie Alexander's favorite list.

You can also sign-up to receive email notifications whenever Andie Alexander releases a new book.