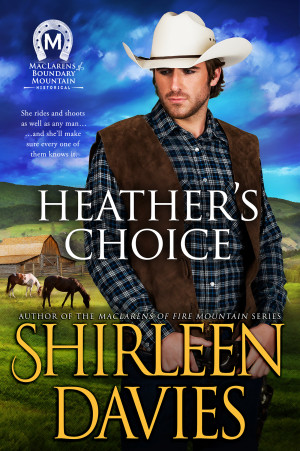 By Shirleen Davies
She rides and shoots as well as any man…
…and she’ll make sure every one of them knows it. More
Heather’s Choice, Book Five, MacLarens of Boundary Mountain Historical Western Romance Series

What is a man to do when the woman he loves refuses to acknowledge his existence?
Caleb Stewart never forgot the girl he met on the wagon train west. When his family continued to Oregon, hers to California, he never expected to see her again. Years later, an unexpected invitation takes him south, to the Circle M ranch and right into the path of the girl he’d watched ride off in the back of a wagon years before.

Heather MacLaren loves nothing more than working on the family ranch. Men, emotions, and relationships hold little appeal, even when a young man from her past drifts back into her life, messing up her ordered existence and causing Heather to doubt everything she believes.

Caleb’s work on the Circle M ranch is better than he’d ever allowed himself to dream. As a valued ranch hand, he’s become the rare outsider the MacLarens have claimed as their own. His only disappointment is the young woman who’s made it clear she’ll never drop her defenses enough to share his feelings.
Facing a hard truth, Caleb is forced to make a tough decision.

First, he must help his adopted family eliminate a danger threatening to destroy not only Circle M but the entire MacLaren clan.

Heather has faced many challenges as the oldest female MacLaren cousin. But nothing prepares her for the savagery of the attacks against her family. Although they all stand together, there’s one person she knows will always remain by her side. He’s also the one man who has the ability to crush her spirit…and her heart.

Will fighting side-by-side to save the Circle M strengthen their bond? Or will it tear their tenuous relationship apart?

Heather’s Choice, book five in the MacLarens of Boundary Mountain Historical Western Romance Series, is a stand-alone, full-length novel with an HEA and no cliffhanger.

Shirleen Davies writes romance—historical, contemporary, and romantic suspense. She grew up in Southern California, attended Oregon State University, and has degrees from San Diego State University and the University of Maryland. During the day she provides consulting services to small and mid-sized businesses. But her real passion is writing emotionally charged stories of flawed people who find redemption through love and acceptance. She now lives with her husband in a beautiful town in northern Arizona.

Shirleen loves to hear from her readers.

About the Series: MacLarens of Boundary Mountain

A captivating historical western romance series set in the burgeoning and treacherous old west. The MacLarens of Boundary Mountain present a family devoted to family and building a better life in the rugged frontier. If you’re a reader who wants to discover an entire family of characters you can fall in love with, this is the series for you. Go along for the ride in these gripping stories that seize your attention from the very first page.

You have subscribed to alerts for Shirleen Davies.

You have been added to Shirleen Davies's favorite list.

You can also sign-up to receive email notifications whenever Shirleen Davies releases a new book.