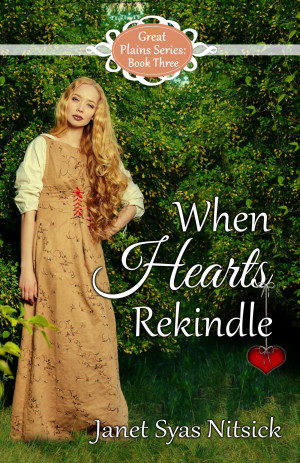 To escape her pain, Betty travels from Elkhorn to Omaha, Neb., in 1894 to attend the Immanuel Lutheran Hospital Nursing School. While being escorted there during a blizzard, she and her driver become stuck and happen to arrive at the home of the Knudsons. This is where Betty meets Russ Knudson. He instantly takes stock of her familiarity to Gwen Ward, the beautiful woman he courted until she chose another. That similarity and the possibility of another heartbreak, Russ places distance between Betty and him.

However, Betty is not the only problem Russ faces. He and his father have secured a bank loan on the hope that their steer would win a blue ribbon at the upcoming county fair. Then they could sell that beef for a high price and pay off what they owed. But the banker wants Knudsons’ land, and he and his cohorts will do everything to prevent them from doing so.

When Hearts Rekindle is a suspenseful, touching story about two lost souls searching for love but unable to embrace it, and a farm placed in jeopardy by the foolish actions of Russ and his father.