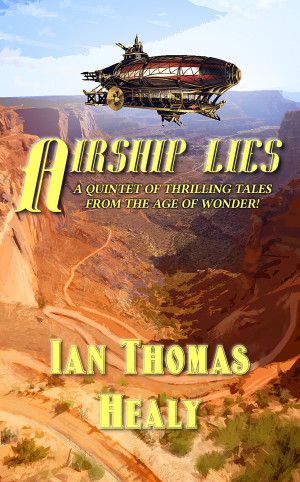 Pressure: In a world where men have begun their conquest of space in rickety, steam-powered spaceships called Fultons, a desperate freight crew struggles to make an impossible deadline.

The Leash: A boy gets caught up in a storm and finds himself the unwelcome guest of the pirate crew of the legendary dirigible, the Black Dog.

The Ghost in the Barbershop: Frontier town Muddy Creek has always had more than its fair share of weirdness, but nobody expected a ghost to begin haunting Angus McTavish's barbershop.

Plague Ship: When a raid accidentally brings a nasty virus aboard the pirate airship Coyote, mutinous thoughts surface and family members face off against each other.

Rabbit Stones: All Gordon wanted to do was explore the wilderness and make maps, but after he is robbed and left for dead, he must decide whether he is the sort of man cut out for revenge.

Ian Thomas Healy is a prolific writer who dabbles in many different speculative genres. He’s a ten-time participant and winner of National Novel Writing Month where he’s tackled such diverse subjects as sentient alien farts, competitive forklift racing, a religion-powered rabbit-themed superhero, cyberpunk mercenaries, cowboy elves, and an unlikely combination of vampires with minor league hockey. He is also the creator of the Writing Better Action Through Cinematic Techniques workshop, which helps writers to improve their action scenes.

Ian also created the longest-running superhero webcomic done in LEGO, The Adventures of the S-Team, which ran from 2006-2012.

When not writing, which is rare, he enjoys watching hockey, reading comic books (and serious books, too), and living in the great state of Colorado, which he shares with his wife, children, house-pets, and approximately five million other people.

You have subscribed to alerts for Ian Thomas Healy.

You have been added to Ian Thomas Healy's favorite list.

You can also sign-up to receive email notifications whenever Ian Thomas Healy releases a new book.