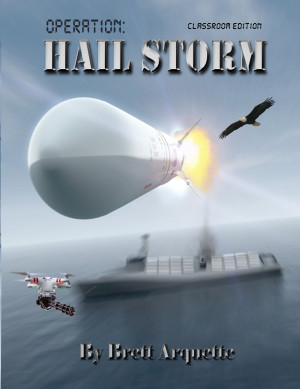 Dubbed,"the father of the drone thriller," Brett Duncan Arquette was born in 1960 and anointed with his mother’s pen name “Duncan”, given to him by award winning author Lois Duncan. During her career, his mother Lois has written over 32 best selling young adult books, some of which have been made into movies, including the movie “I Know What You Did Last Summer" and "Hotel for Dogs". Brett was raised in New Mexico and moved to Florida on his 30th birthday. Arquette spent most his career working as the Chief Technology Officer for one of the largest Circuit Court Systems in Florida. In 2002, Computerworld Magazine selected Arquette as one of the “Premier 100 IT Leaders” in the world, describing him as a “visionary” in reference to the cutting-edge technology. His books are peppered with technology acquired from his vast experience in advanced computers and audio/video systems. Writing on the weekends, Arquette’s first book, "Deadly Perversions", was published in 2002. His additional titles are "Seeing Red", "Tweaked", "The Pandemic Diary" and "Soundman for a B-Band". His new Hail series has struck a cord with readers, putting him on the map as an up and coming author. His Hail series consists of "Hail Storm" (Hail #1), "Hail Warning" (Hail #2), Hail Strike (Hail #3), which will be followed by "Hail Damage (Hail #4)" due in 2018. Mr. Arquette's primary aspirations are to retire from the 9 to 5 grind and become a best-selling author, following in his famous mother’s footsteps. Mr. Arquette currently resides in the Sunshine State with his wife and three children.

Really liked it! It starts with a tragedy that drives a billionaire to create his own high-tech vigilante/retribution group that is mostly outside government control, notwithstanding his connection to the United States as a citizen. He can go after the worst of the bad guys with some really novel approaches (automation) and give the government plausible deniability. The characters aren't real well-developed but get more so in book two.

You have subscribed to alerts for Brett Arquette.

You have been added to Brett Arquette's favorite list.

You can also sign-up to receive email notifications whenever Brett Arquette releases a new book.