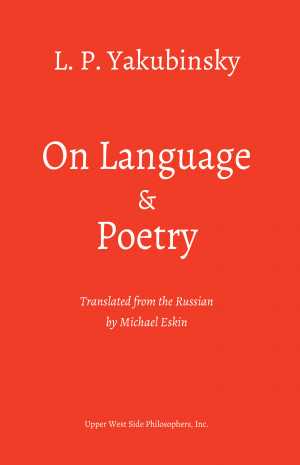 On Language and Poetry: Three Essays

Russian linguist Lev Petrovich Yakubinsky (1892-1945) attended the University of Petersburg from 1909-15, during a period of academic renewal and challenge in Russian linguistics, which had hitherto been dominated by the neogrammarian study of language. The neogrammarian, positivist and historicist approach was contested by a range of young scholars concerned with the functional and social diversity of language as an individual and collective activity. In this heated atmosphere of re-evaluation and change Yakubinsky, together with some of his fellow students and colleagues, such as Osip Brik and Viktor B. Shklovsky, founded, in 1916, the Society for the Study of Poetic Language, thus initiating the movement that would subsequently go down in history under the moniker Russian Formalism (without which, in turn, such schools of thought and criticism as structuralism, poststructuralism and deconstruction would be unthinkable).

You have subscribed to alerts for L. P. Yakubinsky.

You have been added to L. P. Yakubinsky's favorite list.

You can also sign-up to receive email notifications whenever L. P. Yakubinsky releases a new book.