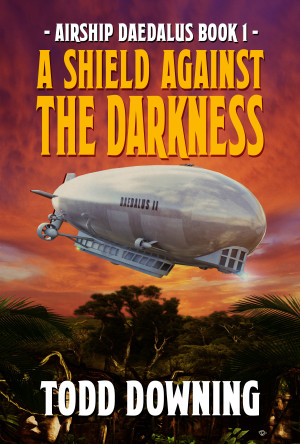 Airship Daedalus: A Shield Against the Darkness

By Todd Downing
The origin of the Airship Daedalus crew and their first action-packed adventures, from a secret aircraft hangar in New Jersey to the skies (and depths) of the Caribbean, to the thick jungles of the Amazon. Can our heroes foil a nefarious plot by Aleister Crowley to open a portal into another dimension and summon a terrifying horror? More
April, 1925 finds ace pilot Jack McGraw fleeing hostile fighter planes and a mysterious zeppelin over the skies of New Jersey. Then a woman from his past invites him to dinner at Thomas Edison's home and drafts him into the A.E.G.I.S. foundation.

Jack's mission is to fly an experimental aircraft and lead a crew consisting of his comrades from the Great War against a well-funded secret society bent on pillaging history's great treasures and amassing dangerous power.

Together with their crewmates, Jack McGraw and Dorothy "Doc" Starr encounter sky pirates, Haitian voodoo, terrifying creatures of the deep, an Amazon tree-city, rocket zombies, and an ancient temple where Aleister Crowley attempts to open a dimensional portal and summon a bloodthirsty demon!

Based on the Airship Daedalus comic strip by Todd Downing and Brian Beardsley, A Shield Against the Darkness is the origin story of the Daedalus crew, and a prequel to Assassins of the Lost Kingdom by E.J. Blaine.

Todd Downing is the primary author and designer of over fifty roleplaying titles, including Arrowflight, RADZ, Airship Daedalus, and the official Red Dwarf RPG. A fixture in the Seattle indie film community, he is the co-creator of the superhero-comedy webseries The Collectibles, and the screenwriter behind The Parish and Ordinary Angels (which he also directed). His first feature film, a supernatural thriller entitled Project, was included in a PBS young directors series in 1986. He has written for stage, screen, comics, audiodrama, short-form and long-form, interactive and narrative, in a career spanning three decades. The father of two adult children, Downing spent several years in the videogame industry, working on games such as Spider for the Playstation, Allegiance for the PC, and Casino Empire. He also creates book covers and marketing art for fellow authors and corporate clients, and has done voiceover work for Microsoft and the Seattle Seahawks Pro Shop.

Widowed to cancer in 2005, Downing remarried in 2009 and currently enjoys an empty nest in Port Orchard, Washington, with his wife, a nihilistic cat, and a flock of unruly chickens.

Reviews of Airship Daedalus: A Shield Against the Darkness by Todd Downing

You have subscribed to alerts for Todd Downing.

You have been added to Todd Downing's favorite list.

You can also sign-up to receive email notifications whenever Todd Downing releases a new book.