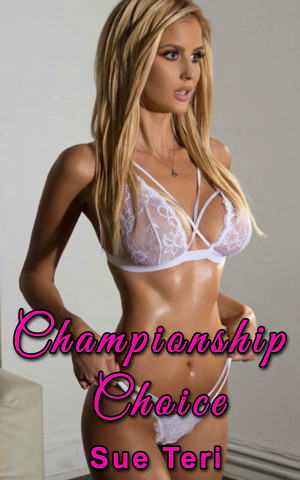 However, this year he was unable to go to championship game, so he invited his friends to watch the game on his large flat screen TV at Sue and Lou’s home. So, Sue was not looking forward to spending the day with Lou’s obnoxious friends watch lacrosse, drinking beer and eating junk food.

The Thursday day before championship weekend, Lou had to go out of town on business and was supposed to return that Saturday. However, he had to stay longer. Even though Sue was sad that Lou will not be home for the weekend, she was very happy that she wasn’t going see Lou’s friends. She was going to have the house to herself.

When the four men arrived, she let them graciously and when the pre-game started, she went upstairs. The guys were yelling and carrying on that it made it difficult for her concentrating reading her book. Since Lou was here, she decided to get revenged. She dressed in her sluttiest outfit and went downstairs to give them a choice; watch the championship game or watch her being a slut.
Available ebook formats: epub mobi pdf lrf pdb txt html
First 20% Sample: epub mobi (Kindle) lrf more Online Reader
pdb
Price: $0.99 USD
Buy Add to Library Give as a Gift
How gifting works
Create Widget
Tags: masturbation strip tease exhibition hand jobs championship game friends watch touching chest unbottoned buttons wet suff
About Sue Teri

You have subscribed to Smashwords Alerts new release notifications for Sue Teri.