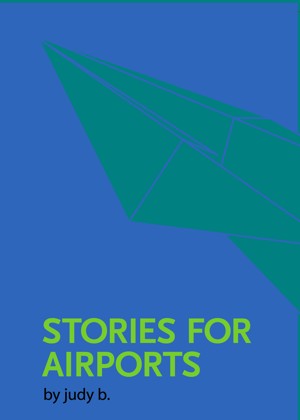 By Judy B.
Rated 5.00/5 based on 4 reviews
Going somewhere? Stuck where you are? This book is for you.

San Francisco literary artist judy b. is the author of the fiction collection Stories for Airports.

In her life as a journalist, judy b. has written and edited for various newspapers and websites across the country. She has produced and directed daily news programs for Sirius satellite radio and environmental news shorts for the CBS Radio Network. As culture editor of Wired News judy b. appeared regularly on KVIE-TV's California Capitol Week and hosted Wired News Audio Spin, which she also created and produced. She has spoken at conferences around the world, including South by Southwest in Austin, Texas.

Along with S.M. Peters and Josef Aukee, judy b. founded Saucy Algonqs, a writing collective that staged readings throughout the Bay Area. She originated the role of Barbara in Peters' play Piece of You at the Jon Sims Center for the Arts and currently contributes vocal stylings to Aukee's poésie performances.

A jazz-trained vocalist, judy b. is known for improvising lyrics and her songful storytelling. She has performed in many Bay Area clubs, among them: Jazz Nouveau, Dogpatch Saloon, Rasselas, Bistro Yoffi, and the Marriott Hotel. Her varied exploits have included tangential stints as a teacher, translator, and tour guide. She identifies as an artist, volunteers for social justice and sustainability causes, and is an avid supporter of small, locally owned businesses — especially in San Francisco, where she lives.

Learn more about Judy B.

Reviews of Stories for Airports by Judy B.

Moments of growth and change—some monumental, others subtle—are set under a microscope in this collection, sounds and sensations amplified by expert and musical use of language. Judy B is precise in her selection of words, which she artfully employs to slow or even freeze moments in order to examine them (in particular the perils of San Francisco traffic and the exploration of the body in relation to her characters’ states of mind), building tension for the consequences and/or resolutions to come.

My favorites include "House, Ex-Wife" for the rediscovery of self within the beautiful and acute heartache of being left behind; "Hill Like a Sleeping Lady" (a nod to Hemmingway?); the very short "Icarus of Market Street" for its beat of fear and near loss followed by relief and gratitude; "Mother Mary Came to Me" for its cheeky consideration of the slippery nature of enlightenment, and "Excursion" for the talent required to write about what we cannot see.

(reviewed the day of purchase)
Bernard Fancher reviewed on Feb. 2, 2013

Every one of these stories is a beautiful gem.

This collection of great stories is set lovingly in my own hometown, San Francisco. It's a book of sights and sounds, traffic and fog, populated by distinct and very real characters. The stories vary wildly in tone and topic, resulting in quite a satisfying assortment of flavors. I especially enjoyed the very funny tale of the facial rash shaped like Guadalupe, and the onion-layered regression of Clang Clang Clang.

The title of this excellent series of short stories recalls Brian Eno’s “Music for Airports”; the stories are all about finding something unusual or out of the ordinary in the “background muzak” of everyday life that we would normally ignore. Taken as a whole, the collection reminded me somewhat of “Short Cuts” (the Robert Altman film rather than the Raymond Carver stories on which it was based); I had a similar “privileged” sense of dipping in and out of the everyday lives of a whole series of unconnected characters across the same city. This gave the book an unusual sense of coherence (despite the impressive diversity of styles and subject matter on display in the individual stories). An undiscovered Smashwords gem. Click here for a longer review:
http://www.paulsamael.com/blog/stories-for-airports

You have subscribed to alerts for Judy B..

You have been added to Judy B.'s favorite list.

You can also sign-up to receive email notifications whenever Judy B. releases a new book.