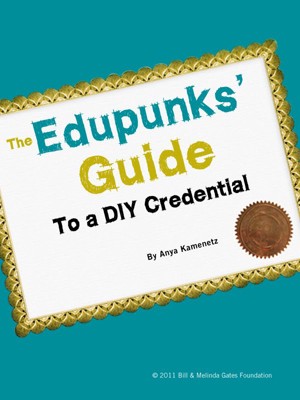 The Edupunks' Guide to a DIY Credential

*A series of tutorials: How to Write a Personal Learning Plan, How to Teach Yourself Online, How to Build Your Personal Learning Network, How to Find a Mentor, How to Get a Credential, How To Demonstrate Value to a Network.


Anya Kamenetz is a senior writer at Fast Company Magazine, where she writes the column Life in Beta, and the author of two books, Generation Debt (Riverhead, 2006), which dealt with generational economics and politics including student loan policy, and DIY U: Edupunks, Edupreneurs, and the Coming Transformation of Higher Education, (Chelsea Green, 2010) which investigated the roots of the cost, access, and quality crises in higher education as well as innovations in technology and social media to address these crises. She was named a 2010 Game Changer in Education by the Huffington Post, received 2009 and 2010 National Awards for Education Reporting from the Education Writers Association, and was nominated for a Pulitzer Prize in Feature Writing by the Village Voice in 2005. She travels and speaks at campuses across the country, and often gives comments on NPR, CNN and other news networks.

I usually am a bit reserved with my book ratings, so when I rate an ebook as 5 star it means something. I have never read or come across anything like this before, and I really wish this ebook was around when I was a recent high school graduate trying to figure what I was going to do next.

This is a wonderful resource and inspiration and motivation and whatever else you'd like to call it to get started or continue your online learning. There is so much free information online that it would be easy to learn enough to get a degree or certificate or something for all the information we process.

This ebook gives you the tools to do just that. I haven't tried them out yet, but oh I want to. There are so many subjects and degrees I've been drawn to lately (even after just completing an associate's degree last year). And with all the reading I do (!) it's clear I've ingesting enough information that I should be doing something with it. Now I know I can, and with this book I can do something with it. I love this book.

(review of free book)
Tony Levelle reviewed on April 11, 2012
(no rating)
Excellent resource, with links to all websites. Detailed how-tos and many stories of successful self learners. A must-have if you are a DIY learner

My only complaint is the formatting. The lack of distinctive headers, page numbers and paragraph indents makes this otherwise excellent book difficult to use. A puzzling omission in a superb book.

A very nice information resource by Anya Kamenetz. Although I was expecting a "formal" book reading experience but it is quite simple and straight forward in its approach. This books straight-away presents reader with the information needed to start learning on his own.
I am strong believer of the concepts on which this book is based.
I recommend this book specially for teachers and mentors so that they can better guide their students. This book will surely increase their awareness about the possibilities of online learning.

You have subscribed to alerts for Anya Kamenetz.

You have been added to Anya Kamenetz's favorite list.

You can also sign-up to receive email notifications whenever Anya Kamenetz releases a new book.