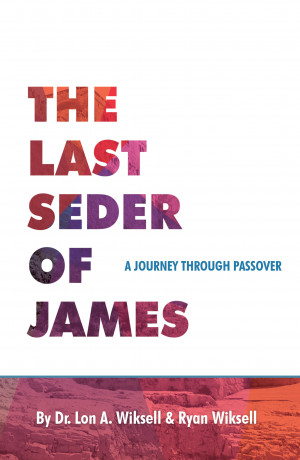 The Last Seder of James: A Journey Through Passover

“With great imagination and perception, Lon and Ryan Wiksell give a real sense of the apostles’ very Messianic Jewish faith in Yeshua.”
-Dr. Daniel Juster, Director of Tikkun America and author of 17 books, including Jewish Roots and Passover: the Key that Unlocks the Book of Revelation

Lon A. Wiksell, D.Min
Executive Director of Our Father Abraham

Originally from Sioux City, Iowa, Lon grew up in church as the son of Pentecostal pastors. He completed his first two years of college in Iowa before moving to Springfield Missouri and working for Evangel University where he met his wife Fran. He later worked for Drury University and Missouri State University, where he also completed his BS and MBA. In 1988 they moved to Tulsa where Lon studied at Oral Roberts University and received his MDiv in 1992. In 2013 he received his Doctorate of Ministry in Messianic Jewish Studies from The King’s University.

Lon and Fran were co-founders and co-leaders of Or HaOlam Messianic Congregation from 1995 to 2002. They then went on to start House of Messiah in 2004, devoted to understanding the words of Yeshua within their historical context and celebrating the seven biblical festivals as a pattern of personal and community life. Lon and Fran have now merged House of Messiah with Kingdom Living, and are also highly involved in organizing our city-wide Biblical festivals.

Ryan was raised in the Assemblies of God in Northeastern Oklahoma, and joined the Messianic Jewish movement with his family in Kansas City during his high school and college years. A personal call to ministry led him to study music and theology at Evangel University. Doors were then opened for him to serve in various Southern Baptist churches, as he held positions of music leadership and communications support. Ryan married Christina in 2003, and shortly thereafter they pursued a call to plant a grassroots independent church in downtown Springfield, MO, called The Front Porch. After this effort drew to a close in 2011, they sought out a new spiritual family, which they found in Christ Episcopal Church in Springfield.

Today, Ryan and Christina are blessed to be the parents of twin two year-olds Asher and Anya. In the summer of 2018 they will relocate to Alexandria, Virginia, for Ryan to enroll in the Master of Divinity program at Virginia Theological Seminary.

Learn more about Our Father Abraham

You have subscribed to alerts for Our Father Abraham.

You have been added to Our Father Abraham's favorite list.

You can also sign-up to receive email notifications whenever Our Father Abraham releases a new book.