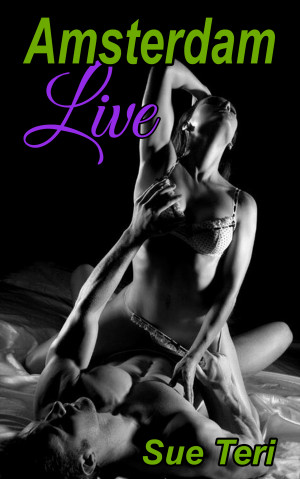 Walking through the Red-light District looking for the sex club, Sue and Lou descend the staircase to the basement, where they drank waiting for the show. After an hour, it was announced that it will be canceled. Lou jumped up announced that the show will go on. Nervous as they were about to introduced, Sue and Lou were about to perform the performance of their lifetime live in Amsterdam. More
Amsterdam, notorious for its infamous cafes and Red-Light District, was on Sue and Lou’s major list destination on their trek across Europe. They view this city as a naughty hotspot that they must see at least once in their lifetime. Sue wanted to see a live sex show.

At the hostel, Sue and Lou were given address of live sex club by another couple. They were told its smaller and more intimate club unlike the usual tourist attractions like the Banana Bar, Casa Rosso, Moulin Rouge or the Sex Place.

Walking through the Red-light District looking for the club, the every presents of shady street salesmen pitching the clubs. At the same time, prostitutes would be tapping on their storefronts, enticing customers to try their wares.

Finally, they found the address and descend the staircase to the basement level club. The Club was a mishmash of furniture, there was very floral scent combining with coffee and cigarette smell. Not have any waitress or waiters, Sue went to the bar to get them drinks where she found out the shows is supposed to start at 10.

Sue continued to get the drinks from the bar and kept asking when the show was going to start. He said he was afraid that show may have to be cancelled if the performers don’t show up unless someone from the audience volunteers. Sue told him she would talk to Lou about performing if they don’t show up.

You have subscribed to alerts for Sue Teri.