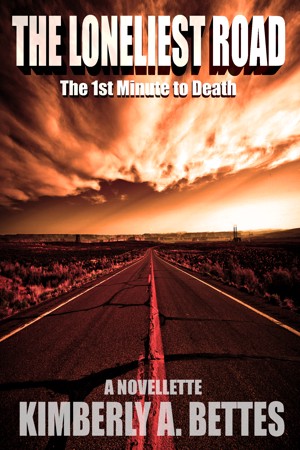 By Kimberly A Bettes
Adult

Rated 4.50/5 based on 6 reviews
Chris Peters takes a road trip to ease his woes after losing his wife. Stopping at a roadside diner in a town not marked on a map, he notices the waitress looks eerily like his wife. Unwilling to leave, he gets a room at a nearby hotel. When the waitress ends up dead, Chris stands accused of her murder. His world spirals out of control. He realizes too late that sometimes justice can be macabre. More
Chris Peters takes an impromptu road trip to ease his woes following the death of his wife.

Stopping at a roadside diner in a town not marked on a map, he notices the waitress looks remarkably like his beloved wife. The sight of the waitress brings comfort to Chris for the first time since his wife's death. Unable to bring himself to leave her, Chris gets a room at a nearby hotel.

When the waitress ends up dead, Chris learns that towns not marked on maps are best left alone. His world rapidly spirals out of control. Accused of murder, Chris realizes too late that sometimes justice can be macabre.

Kimberly A. Bettes was born on Thanksgiving Day, 1977, completely ruining any chance her mother had at enjoying a delightful dinner. At the age of 12, Kimberly began writing poems, essays, and short stories. At 14, she began her first novel, a project that would take two years and many sleepless nights to complete. Since then, she has written more than ten novels, dozens of short stories, and hundreds of poems and essays.

She currently lurks in the Ozark Mountains of southeast Missouri with her husband and son. It's there she terrorizes the residents of a small town with her twisted tales, most of which focus on the dark side of human nature.

In addition to writing, Kimberly is also a freelance photographer and life-long chocolate enthusiast.

This writer is one of my favorites. There's no drawn out story line. It kept my attention from the start, and left me wanting more. It's a wonderful, well-written, chilling short story! You wont be disappointed reading anything from Kimberly A Bettes!
I have had the opportunity to read all but the last in the Minutes to Death series. I love stories that are raw, and get to the point. This leaves you with an OH MY, at the end!

All of this authors books have been great. They keep me wanting to read more and more of her writtings

This short story held all the aspects that I look for in one. I read short stories for 2 reasons; one as a palette cleanser after reading very long cerebral novels and to try out new authors to see if I like them. This had just enough character development for a short story, you didn't know the character, you just knew enough to be able to gain an understanding of what was going on (some short stories try to develop their characters too much, that can be saved for a novel). It had a quick plot line that kept you on the edge of your seat wondering what would happen next, and it made me want more from this author. Very nice story of injustice.

People seem to be using the word macabre when describing this story. I guess maybe I just see things differently. The English major in me wants to point out a few flaws within the editing of the book, but that's all relatively minor as it doesn't take away from the over all story. While there are a few punctuation issues, you can still figure out what the writer was saying. There are a couple of areas where words appear to be reversed by accident, but again, the story still flowed well enough to not lose you. In a way, i feel the story could have been a little better. The author does well at the beginning in hooking you with the introduction, but by the last few chapter in the selection, I found myself losing interest. That was one other issue I felt was added, but not really needed in this story. I've noticed a lot of modern writers tend to break down scenes or instances into separate chapters far too often. In some cases, I have seen chapters as small as 150 words which in a short story seems rather ridiculous. Still, in this instance, you forgive the writer for this because the story does still do what it intends to do which is hook the reader and get you to finish the story.

One other issue I found with the story was some confusion I ran into as far a past and presentence. I will admit that this is my was simply my grammar police mind talking and again, the issues were minimal and you forgive the author for this. I know it seems I am focusing on the negatives here so here are some positives.

The story is presented by what feels, at first, to be a somewhat overly descriptive narrative, but after a handful of paragraphs, you are relieved that the writer decides to take a simpler approach to the telling of the story which gives it a more realistic feel. So often these days I see stories that come off as pretentious and offer far more description than what is usually needed. Often, those stories remind me of works from the 19th century when I found that so often, authors felt the need to burden the reader with an abundance of detail instead of letting their own minds fill in the gaps. In this work, Bettes allows you just enough room to let your mind wonder which makes this much more fun to read.

You sort of see the ending coming, but you don't mind all that much. While I would have written the ending a little differently, I could see where the author was coming from and what she was trying to get across. She looks at the world the way that it really is when you break down all the bureaucratic nonsense, revealing what is essentially a mob mentality. It makes you think about how people, knowing nothing of a case, can instantly believe that a person is guilty of a crime simply based on a few random facts, spoon fed to them by an authority figure.

While this wasn't the most incredible thing in the world to read, it does hold your attention for the duration, and if you take the time to really think about it, you begin to wonder just how often this sort of thing really happens. You may not hear about it on the news all that often...but then again, maybe you do. That being said, I do look forward to reading more of Bettes work so I can see exactly how she grows from here. 3.3 / 5 stars.

Macabre is a good description for this story. It's also entertaining, holding my attention right to the end. A short, yet wonderful peek into a very bizarre world.

This short story was not only macabre, but it made me feel really uncomfortable because it confronted how 'normal' people can change when they get together as a group and make their minds up about something. It delivered as a suspense thriller and I found myself reading faster to find out what the end result would be (even though a great part of me didn't want to! The main character is well developed and sufficiently flawed to make you wonder whether he is going to be the root of the problem - but I can't tell you too much or I'll spoil it! The story is well worth reading, and certainly kept me occupied on the train journey into work!

You have subscribed to alerts for Kimberly A Bettes.

You have been added to Kimberly A Bettes's favorite list.

You can also sign-up to receive email notifications whenever Kimberly A Bettes releases a new book.