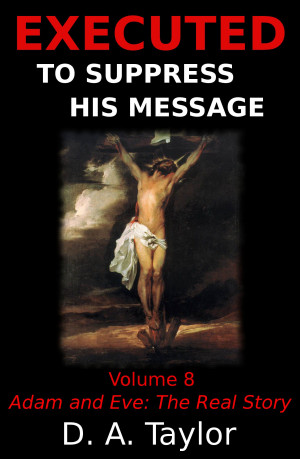 Adam and Eve: The Real Story

By D. A. Taylor
Most Christians can recite the Ten Commandments of the Old Covenant. But can you recite ten of the commands Jesus gave to Christians? How about five? Or even three? Truth be told, the average Christian knows very little of what Jesus taught. And why? Because Christians obtain most of their spiritual information at church, where preachers seldom mention the words of Jesus Christ. More
"Executed to Suppress His Message" explains how institutionalized Christian religions acquired vast financial resources by suppressing the teachings of Christ, then substituting their own humanly-created doctrines for our Lord's gospel. By turning a blind eye to our Lord's commands against using money within the Church, Christian leaders have built hundreds-of-thousands of churches and acquired millions of members — but in doing so, they have hidden Christ's good news about a God of infinite love and forgiveness, as they work to frighten people into church attendance, by promoting a fictional gospel about a God of judgment and punishment.
Download: epub
Price: Free! USD
Add to Library
Create Widget
Tags: teachings of jesus false doctrine christian church christian authority church authority
About D. A. Taylor

When I was in my late twenties, I enthusiastically jumped into a Protestant denomination. I was very dedicated and spent 25 years attending church every week, bible studies 1-2 times a week, and volunteering for every service and evangelical task I could find. Later I was ordained and occasionally spoke before the congregation. I was well on my way to the Kingdom of God (or so I thought).

But toward the end of my church experience, the senior pastor of my denomination passed away and another man took over. This new man determined that certain church doctrines were wrong—and he began to change those doctrines. This caused quite a commotion, forcing the denomination into several doctrinal camps. Many high-ranking pastors left, took brethren with them, and started new churches. My head was spinning: I had left Catholicism to find Protestantism, which I considered God’s true religion. But now my Protestant world was falling apart.

So I decided to find out which senior pastor had the “right” doctrines. For many months, I spent all my spare time studying the Bible: I never had studied like this before; instead I just believed what I heard from the pulpit. Of course, I was told that I should “prove all things.” But I thought this meant I should make sure the speaker accurately quoted the Scriptures. Yet now as I reflect back, perhaps I was just too lazy to study on my own?

And as I carefully studied the Bible, I discovered numerous Scriptures I had never heard at church. It became clear that my church was not preaching a great deal of what Jesus taught. Thus I wondered: “Am I in the wrong Protestant denomination?” So I set about to research other denominations and what they believed: Baptist, Methodist, Assembly of God, Church of Christ, Lutheran, Adventist, Evangelicals, etc. I discovered how each of these denominations had vastly different views on doctrine. So why were their doctrines so radically different?

Then I decided to go through the gospels and carefully document all of Jesus’ teachings. I took my list of the Lord’s teachings and compared it to the doctrines of major Christian denominations. And when I did this, I discovered something profound: each and every Christian denomination ignored the same set of Jesus’ teachings. These teachings are never mentioned at church; nor are they discussed in church literature; neither are they described in any denominational Statements of Belief.

Across the board, churches and their pastors ignore these specific doctrines of Jesus Christ. They are never, ever shared with God’s people. Moreover, both the Bible and church history show how even back in the 1st Century, preachers were suppressing these very same doctrines.

How important are these teachings of Jesus? He was killed to suppress them.

So I wrote Executed to Suppress His Message to explain how key teachings of Jesus were suppressed, modified and replaced in order to raise up Christian churches in the image of the Old Covenant religions Jesus condemned.

I hope that you will find this book informative—and that it will strengthen your personal relationship with God.

Learn more about D. A. Taylor

About the Series: Executed to Suppress His Message

Learn the teachings of Jesus Christ that churches will not share.

Also in Series: Executed to Suppress His Message

You have subscribed to alerts for D. A. Taylor.

You have been added to D. A. Taylor's favorite list.

You can also sign-up to receive email notifications whenever D. A. Taylor releases a new book.