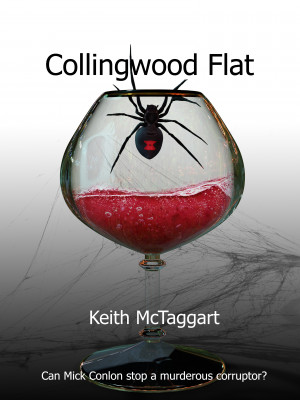 By Keith McTaggart
Bodyguard Mick Conlon lives in 1860 slum Collingwood Flat, Melbourne. He is thrust into a detective role and must solve an explosives murder and find the evil man who ordered it. Trainee Conlon is coached by lover Annie, bar and brothel keeper. Mates Gul and Scratcher help too. Can Conlon’s team combine first to survive, then to save their fledgling city from corrupt takeover? More
Collingwood Flat is an historical crime story, with a dash of romance. Mick Conlon is a bodyguard working the unsewered lanes of shanty town Collingwood Flat in 1860 Melbourne, Australia. Thousands straggled back to the city after the Gold Rush and now eke out an existence in shacks on Collingwood Flat. Conlon’s gang boss Hardy orders him to make sure opposition gang leader Madigan stays safe. If anything happens to Madigan, Hardy will be blamed and his transition from mobster to legitimate businessman could not survive the scandal. Conlon has barely started his bodyguard duties when Madigan is blown to pieces. Hardy demands that Conlon finds the real culprit, because Hardy himself is arrested as a suspect.
Conlon has no idea how to start his hunt for a killer, but his lover Annie, local bar and brothel keeper and keen reader, boosts his confidence to get started as a detective using Poe’s Dupin as a role model.
Conlon is helped by his usual offsiders, young indigenous man Gul and street kid Scratcher and by old friend Wang, the café owner. As they hunt the “bang man” and his mysterious employer, they find that more is at stake than control of petty crime on Collingwood Flat. The prosperity of the new city is at risk of being corrupted totally. The director of these power grabs and corruption remains very well camouflaged
Farmer, a worried senior police officer, seeks out Conlon and is keen to cooperate. Despite vicious opposition or sometimes because of it, members of Conlon’s team travel to Bass Strait on a fishing boat, to Queenscliffe, to the deep bush of the Dandenong Ranges and to many parts of the fledgling city of Melbourne, including Hobson’s Bay, where there is a terrifying encounter on a prison hulk. The emerging investigators attack life with cheek, laconic wit and persistent leg-pulling. The widow of Madigan, Laura, becomes a strong leader and despite Hardy’s mistrust, she is a firm ally against their secretive enemy. While Conlon is no Dupin, he and the team he gathers manage to piece together identities, locations and finally to cause a compromising confrontation.

“The backdrop to this novel is acutely interesting. The parallels with the many faction and gang wars that make the daily media entertaining today, cannot be missed in this tale. Collingwood Flat is … a place of rutted unmade roads, open sewers, gin joints and bawdy houses. But be assured there are a nice class of girl in the brothel and two grades of gin to be had. Already the class divide is beginning to separate.”
[Clare Allan Kamil, author and editor]

First 15% Sample: epub mobi (Kindle) lrf more Online Reader
pdb
Price: $5.99
Free! USD
Buy with coupon Use the code AG100 at checkout to get this book for free during our site-wide promotion!
(Offer good through May 31, 2020 )
Have a better coupon?
Add to cart, then apply your coupon
Add to Library Give as a Gift
How gifting works
Create Widget
Tags: romance crime police historical detective indigenous gangs explosion ghostly encounter bush adventure
About Keith McTaggart

Keith taught science for a long time and wrote some science stuff. While writing Flushing Dunnies for Melbourne Water and Science Teachers Association of Victoria, he discovered from Chris Simpson and Paul Saddler that there had once been a shanty town on Collingwood Flat, full of refugees from the gold fields at Ballaarat. This happened in what is often called the most liveable city in the world these days. So it had to be rough, smelly, tracks rutted in summer, mud in winter, sewage emptied in streets and of course a hotbed of crime with some crims just a bit more powerful and controlling than others. It screamed of novel material and here it is - Collingwood Flat. Also available on Smashwords is a novel for [about] eleven year old boys and girls - a slightly old-fashioned adventure with sailing themes and brave kids.
Sailing? Yes, Keith loves it and the profile photo shows a freezing old codger working in winter on his boat, Elixir, a 10 metre yacht of great age. Chris [not the one mentioned above] likes the sunny part of sailing and Rosie the cat thinks humans need to go sailing and leave her in the warmth with food, just returning home to let her chase rabbits for entertainment and the occasional chewy [disgusting] meal.

You have subscribed to alerts for Keith McTaggart.

You have been added to Keith McTaggart's favorite list.

You can also sign-up to receive email notifications whenever Keith McTaggart releases a new book.