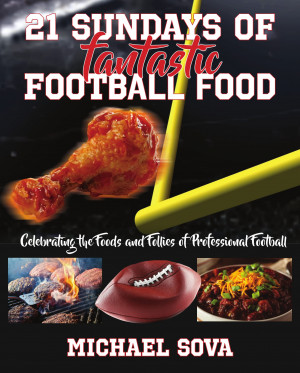 21 Sundays of Fantastic Football Food: Celebrating the Foods and Follies of Professional Football

By Michael Sova
Professional football players, coaches, owners, general managers and officials have, over the years, done some truly remarkable things. Author, foodie and professed football fanatic Michael Sova takes a look back at some of their more memorable, entertaining and often comical exploits. He serves up some pretty amazing grub too: perfect for any tailgate party, game day gathering, or lazy Sunday in More
Based on title alone, you might be led to believe 21 Sundays of Fantastic Football Food is nothing more than a carefully selected collection of game day recipes. There would be nothing wrong with that, but this volume is on a far grander scale.

Do you remember when former Detroit Lions wide receiver Nate Burleson broke his arm in a hapless attempt to save a pizza? How about that time former Pittsburgh Steelers kicker Jeff Reed beat up a towel dispenser just because he couldn’t dry his hands?

Professional football players, coaches, owners, general managers and officials have, over the years, done some truly remarkable things. Author, foodie and professed football fanatic Michael Sova takes a look back at some of their more memorable, entertaining and often comical exploits. He serves up some pretty amazing grub too: perfect for any tailgate party, game day gathering, or lazy Sunday in front of the television.

As you kick back with a delicious Brunch Burger, some Super Supreme Mucho Macho Nachos, Over Stuffed Couch Potatoes or a big bowl of Mexican Corn Dip, you can also have a laugh at the good natured expense of those who play the game we all love so much. Spoiler alert—the term “butt fumble” will come up at least once.

My first career aspiration was to become a college English professor. I did major in English Literature at the State University of New York at Oswego and graduated with honors. I then began my post graduate work at the State University of New York at Albany. What can I say? I sort of hated it which prompted a disconcerting period of reflection and re-evaluation, and I found myself at a personal crossroads. Next thing I knew, I was sitting behind the control board at a country radio station in Kinston, North Carolina. I didn’t know anything about the broadcasting business in general, radio in particular, and about my only prior exposure to country music was when Hank Williams, Jr. sang the theme song to Monday Night Football. The first time I ever spoke into the microphone, at around three in the morning thank goodness, it was to intro a Suzy Bogguss record but I called her Suzy Bogus because I honestly didn’t know any better. Here’s a little more honesty for you. It all sounded pretty bogus to me. I grew up on rock and roll. What did I know from steel guitars and fiddles? Nonetheless, several years later, I was working the mid-day air shift, carrying the titles of music director and promotions director, and bounding up the corporate ladder. That’s when everything changed again.

The Clint Eastwood classic, “Play Misty for Me,” surely overdramatized the danger, but my first rule of radio was to never meet any of the women that called in. I made one exception, and she turned out to be the love of my life. We’ve been married over two decades now. Along the way, we relocated to Upstate New York and had two wonderfully talented children. I traded in my microphone for a paperback copy of “Parenting for Dummies.” Here’s what I learned. Becoming a parent is far easier than it probably should be, but being a halfway decent one is an entirely different matter. I know because I spent years as a stay-at-home dad. I did my best for what that’s worth and hopefully left no lasting emotional scars. And, to preserve my own sanity, I started writing.

My first novel, a racing themed thriller titled “A Shot at Redemption,” took an embarrassingly long time to complete but was very well received. “Parlor City Paradise” came next. I then took a short break from suspense fiction, instead pouring my heart, soul, passion, long-standing Minnesota Vikings fandom, and the subsequent years of torment into “21 Sundays of Fantastic Football Food: Celebrating the Foods and Follies of Professional Football.” It’s not only filled with great tailgate-type recipes, but I can promise it’s one of the funniest cookbooks you’ll ever come across. My third novel, a thriller titled “Blind Switch,” was published in the summer of 2018. I believe it is my best work to date. It’s also semi-autobiographical in that the protagonist and I have something in common. We are both legally blind. Unlike her, however, I’ve never had a trained assassin after me. I would prefer to keep it that way if at all possible.

You have subscribed to alerts for Michael Sova.

You have been added to Michael Sova's favorite list.

You can also sign-up to receive email notifications whenever Michael Sova releases a new book.