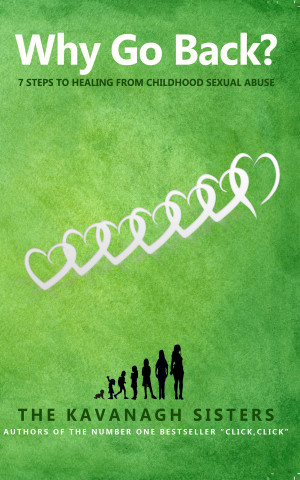 Why Go Back? 7 Steps to Healing from Childhood Sexual Abuse

By The Kavanagh Sisters
‘Why Go Back? 7 Steps to Healing from Childhood Sexual Abuse is a book of hope written by survivors of childhood abuse for survivors and those who support and work them. This is a practical and engaging book that will bring hope and inspiration to sufferers to embark on, and dedicate themselves to overcoming the damage caused to their lives as a result of being sexually abused. More
Why Go Back? 7 Steps to Healing from Childhood Sexual Abuse provides comprehensive information on the numerous impacts of abuse and a number of steps to overcome them. It is written to help other victims of abuse and all those who support them. We are not experts in anything other than our own lives. The information contained within this book is based on our own experiences of abuse and what we found helped us.

The book is divided into three sections with each one covering a particular theme. Part One explores child sexual abuse, and the psychological impacts on its victims. It demonstrates the various grooming techniques perpetrators use on their victims. It also looks at the many contradictions and confusions that existed when dealing with the emotions surrounding relationships with abusers.

Part Two includes a number of questionnaires that we used to assist us in identifying some areas in our life that were affected by our abuse and showed us where our focus was required in order to move forward. We also present the seven steps we used to heal along with some simple exercises and tips to support survivors on their personal healing journey.
Part Three discusses secondary victims and mothers who have or are currently struggling with issues around abuse. It includes personal stories of mothers, one of who is supporting a young victim, another who is supporting a young offender and finally a daughter who is struggling to make sense of her own mother’s awareness of her abuse and her unwillingness to intervene.

We provide some useful information for partners living with adult victims of childhood sexual abuse and discuss how both are affected while navigating through the counselling process.

Each section includes examples from our own experiences and details of what we each found useful.

We are three sisters, Joyce, June and Paula Kavanagh. We are three of ten children, six boys and four girls born and raised in Dublin, Ireland in the 1960’s. We where each sexually abused by our father for over two decades. In 1989, we made the decision to bring charges against him and, in 1990; the Irish state took a successful case against him. He was convicted and sentenced to a term of seven years and was released having served five years.

In September 2011 we wrote our first book entitled ‘Click, Click’ which detailed our childhood experience. This book went straight to number one on the Irish non-fiction bestseller list. The book has been described as being “a powerful, emotional and sometimes harrowing story of childhood abuse.”

Our message of hope has resonated with readers not only in Ireland but across the UK. Following our UK appearance on ITV’s This Morning with Philip Schofield and Holly Willoughby, on May 3rd, 2012 the book went straight to number four on the Amazon UK bestseller list and went on to number three in the UK nonfiction best-seller list and stayed in the top ten for 10 weeks.

In December 2017 we self-published our second book ‘Why Go Back? 7 Steps to Healing from Childhood Sexual Abuse’. This is a book of hope for survivors of childhood sexual abuse. It is a unique resource that manages to blend theory with practical examples of how abuse can manifest in the lives of its victims. It provides real-life experiences of the variety of conditions and disorders that can develop as a result of being abused and what they look like in real life.

It is our intention to promote a greater understanding of childhood sexual abuse and encourage and motivate change.

Learn more about The Kavanagh Sisters

Reviews of Why Go Back? 7 Steps to Healing from Childhood Sexual Abuse by The Kavanagh Sisters

You have subscribed to Smashwords Alerts new release notifications for The Kavanagh Sisters.

You have been added to The Kavanagh Sisters's favorite list.

You can also sign-up to receive email notifications whenever The Kavanagh Sisters releases a new book.