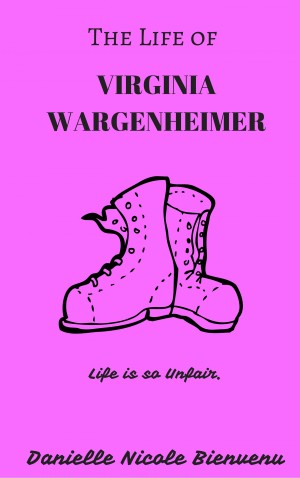 The Life of Virginia Wargenheimer

By Danielle Nicole Bienvenu
Rated 5.00/5 based on 2 reviews
Virginia attracts trouble wherever she goes whether it's with the Girl Scouts, her high school teachers, the trombone or boys. All she wants is to work at Greasy Cheesey's,get rid of a few pimples and disown her freakish family. Seriously.

At 29, Danielle is a professional author and poet of 16 published novels. She wrote her debut novel, "Against All Odds: The Ruby Princess" at 14 years old and published it at 17. She became a professional model in print and on runway at 10. Danielle became a professional actress at 12; doing commercials, theatre, and acting in a pilot series with Haley Duff and Shelly Duval. She has won many international pageants. A former dance teacher, she has been dancing from an early age, winning awards for her choreography and dancing while performing internationally. Like the characters from her first novel, at 18 she received her Coat of Arms from France. Her full name is Danielle Nicole Bienvenu, Lady of Estons.

Danielle began song-writing at the age of 6 and writing stories at 10. Danielle has her Master's from Oxford Brookes University in England in International Law and International Relations (focus on human rights), two certificates from Harvard University in Justice and National Security and a certificate in Counter-Terrorism from Georgetown University. She also holds two Bachelor's degrees from Lamar University in Political Science and French with a minor in Creative Writing. A former French teacher, Danielle is fluent in French as well as English but she also dabbles in Spanish, German, American Sign Language, Hebrew, and Mandarin. After living abroad in Europe, traveling around the world, and teaching English in China, she decided to return to her native Texas.

Danielle is a seasoned missionary who likes beads and feathers. She enjoys playing guitar to her own beat, dancing in grocery store aisles, and singing whenever the urge strikes. She is often found with pen in hand. She has two furry babies, her Golden Retrievers: Duchess Annabelle and Toby Maximus. Danielle is outspoken about being a voice for the voiceless whether it may be human or animal, and is a motivational speaker on overcoming depression and suicide. She adamantly volunteers to help victims of domestic violence and rape. A lover of history, she has dedicated countless hours to preserving historical museums in her native area. It isn’t uncommon to find her in a recording studio or performing her music in her spare time. She loves to read as much as she enjoys writing.

This amusing short story let’s us have a peek into the live of teenaged Virginia Wargenheimer. As every teenager, she’s going through that particularly awkward stage as best as she can; she’s a middle child, sandwiched between two male brothers who seem musically inclined (which she isn’t), required to sell Girl Scout Cookies she doesn’t want to and her parents are absolutely clueless on how to deal with her.

How clueless? They even set her up for a blind (?) date with Bobby Molaboni (gulp!)

However, Virginia is somewhat special (she calls herself weird… but aren’t we all?) and decides to do all within her means to thwart this oncoming episode. She has a masterful plan to become her “opposite” self… and then everything, as in the best laid plans of mice and men, goes belly up. It had a very funny and ironic, (yet too abrupt!) conclusion.

Highly recommended for an enjoyable and quick read..

(reviewed 2 days after purchase)
Harri Romney reviewed on May 21, 2012

I really do like this author's style. This book is the third one that I've read, and again I would say this is aimed towards the teen market; but I still really liked it.

Virginia seems to be quite a troubled teen, who is just trying to find her own way in life (many youngsters would relate very much to her feelings and emotions). Her parents have rather bizarre methods of trying to help her find herself, which includes going as far as arranging a date for her. In some ways this book bore similarities to my own teen experiances, making me laugh and cringe for her. Lovely story!

You have subscribed to alerts for Danielle Nicole Bienvenu.

You have been added to Danielle Nicole Bienvenu's favorite list.

You can also sign-up to receive email notifications whenever Danielle Nicole Bienvenu releases a new book.