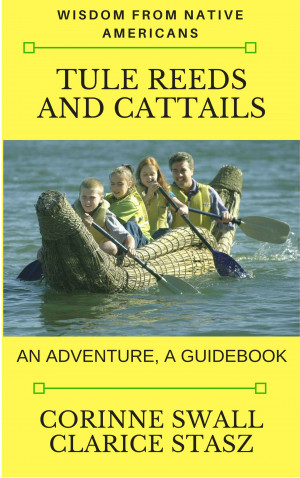 Tule Reeds and Cattails: An Adventure, A Guidebook

By Clarice Stasz
Prepared with teachers, students, and camp counselors in mind, this book explores the long history of California Indians and their relationship to nature and invaders. It includes hands-on projects, such as making ropes, mats, toys, fish traps, and recipes through tule reeds and cattails. A large section details the building of a navigable boat. Well-illustrated. More
These marsh plants can feed and shelter! Contemporary Indians taught the authors about their cultures and how to use plants. The Adventure is the history of California Indians and their wise use of these and other plants. For thousands of years plants provided survival and were used creatively and sustainably. Native wisdom is a form of conservation that makes wise use of resources. Using the history of Coast Miwok and Southern Pomo, we recount early visitors and how they misunderstood the those they met. Despite the Missions' control and the Gold Rush destruction, enough Indians survived to continue past culture and practices. The Guidebook leads you through basic skills, such as making rope and mats. Learn to make toys and fish traps. Because the plants are nutritious, there are even recipes. Links to videos and instructions provide additional training.

Best of all, we provide detailed instructions on building a navigable reed boat, using photos from our own experience. Being aware of the value of hands-on learning, we involved classrooms and children in these projects. Our experience offers pointers on every step of the process, from gathering reeds to launching the boat.

The history also includes quotes from primary sources, such as those of explorer like Frances Drake. The materials will help any teacher approaching the revised Social Science curriculum for California 4th grade. Because these plants occur throughout the United States, the content transfers outside California. California Native history is distinct from others, such as the Plains or Northeast Woodlands, so it offers a good contrast to understand the amazing diversity of American Indian life. The Appendices include a lengthy bibliography of the scholarly sources we used, along with an annotated list of websites for further information.

Clarice Stasz has published over forty years, from social commentary to biographies. A retired professor of history, Clarice is a leading scholar of Jack London, with appearances in documentaries for HBO and PBS. She was noted by Book-of-the-Month Club for The Vanderbilt Women, and has received several awards for her Jack London studies. Starting her writing career as an editor, Clarice is committed to crisp and straightforward narratives to introduce average readers to history. A lifelong reader of mysteries, Slanderley is her first venture into the genre.

Growing up in Southern New Jersey, Clarice attended Douglass College when it was still all-women. She received an M.A. from the University of Wisconsin, and completed her Ph.d. at Rutgers-the State University. Following three years as an educational researcher at Johns Hopkins University, she joined the faculty at Sonoma State University, where she spent her academic career. There she taught courses in history, sociology, and women's studies. She also spent a year in post-doctorate study at Brown University on African-American history.

Living close to Jack London State Historic Park, she discovered the author and his times close to her fascination with the Gilded Age and Progressive Era. This led her to the use of biography as a means to convey American history. Her ongoing research was supported in part by the Rockefeller Archives and the National Endowment for the Humanities. Through these writings run the themes of gender, race, and power relations as subtexts. She wrote the first textbooks incorporating discussion of the male as well as female social roles, this at a time when concentration on women alone prevailed.

Her next book is based upon her family history of immigrants from Bohemia and Hungary to Cleveland after 1865. It explores the persistence of ethnicity generations after migration and apparent assimilation.

Stasz is a lifelong musician, active as a singer, percussionist, flautist, and song writer. For relaxation she hikes and is a bird watcher. Her volunteer work emphasizes arts groups and services to women in need.

You have subscribed to alerts for Clarice Stasz.

You have been added to Clarice Stasz's favorite list.

You can also sign-up to receive email notifications whenever Clarice Stasz releases a new book.