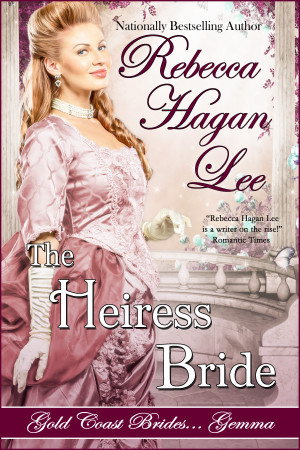 Murphy O’Brien is a former Pinkerton agent and saloon owner who has spent the last several years guarding his own battered heart. The last thing he wants is to become a reluctant bodyguard—and husband—to a pampered American princess. But he soon finds his heart under siege by Gemma’s charm, beauty, and wit.

Gemma knows their marriage of convenience is only an illusion. But she still finds herself falling beneath the spell of Murphy’s husky brogue and masterful touch. And after a few long, enchanting nights in his arms, she realizes the man she has hired to protect her might be far more dangerous to her yearning heart than any assassin…

Book 3 of the Gold Coast Brides series, which includes THE TREASURE BRIDE, THE SILK BRIDE, and THE HEIRESS BRIDE.

“Rebecca Hagan Lee is a writer on the rise!” — Romantic Times

“The Treasure Bride is an incredible diamond. Historical romance fans are fortunate to have a treasure like Rebecca Hagan Lee.” — Affaire de Coeur

After arming herself with a degree in fine arts and experience in radio, television, and film, Rebecca Hagan Lee wrote her first novel Golden Chances. Since then, she’s published numerous bestselling and award-winning novels and three novellas.

She’s won a Waldenbooks Award, a Georgia Romance Writers Maggie Award, several Romantic Times awards, been nominated for an RWA Rita Award and has been published in nine languages.

She currently lives in Georgia with her husband, her two beloved Quarter Horses, and a miniature schnauzer named after literary icon Harper Lee.

You have subscribed to alerts for Rebecca Hagan Lee.

You have been added to Rebecca Hagan Lee's favorite list.

You can also sign-up to receive email notifications whenever Rebecca Hagan Lee releases a new book.