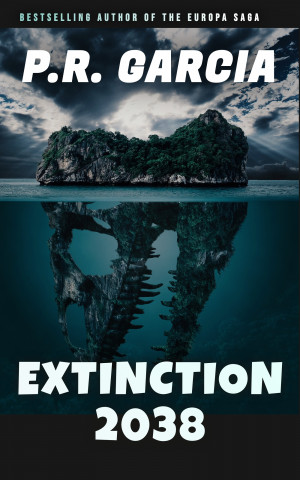 By P. R. Garcia
Paleontologist Alex Stevens had made the discovery of the century - a perfectly preserved corpse of a dinosaur thawing in Antarctica. But as his team members die one by one, he realizes what he found is the true destroyer of the dinosaurs – the original Ebola virus. The world outside grows quiet. No one answers their radio calls. The internet is silent. Is anyone alive? More
We’ve all been told that an asteroid killed the dinosaurs 62 million years ago. But it didn’t.

Paleontologist Alex Stevens had made the discovery of the century -a perfectly preserved corpse of a Stevosaurus antarcticus in the thawing earth of Antarctica. He gathers his secret team and launches an excavation, rejoicing in the fame he’s about to receive. But as his team members die one by one, he realizes his fame will be as the destroyer of humanity. To late he realizes that inside the corpse lies the true destroyer of the dinosaurs – the original Ebola virus.

Dr. Quatermaine is sent by the CDC to discover what is happening in Antarctica. But soon, he, Professor Dilbert, and Maximillian are the only ones left alive. As they search for a cure, the world outside grows quiet. No one answers their radio calls. The internet is silent. No aircrafts come to rescue them. Is everyone dead?

As winter closes in, if they can’t find a way to escape the confinement, they too will die. And with them, the only chance for a cure to save mankind.

Prepare to be taken on an adventure where your only chance is hope.

P.R. Garcia grew up in rural Michigan and is the youngest of three. She became a lover of Science Fiction at an early age when her parents took her to the movies. She was hooked the moment she heard Patricia Neal tell the robot Gort in The Day the Earth Stood Still “Klaatu barada nikto”. Inspired by what was possible, she and her dog spent many days in the fields behind her home fighting aliens and investigating unexplored planets. Her love continued to grow, and while in high school, the series Star Trek hit television, boosting her fascination with what might be out there. Her friends still comment on how she skipped the football games to stay home and watch each episode. When in her thirties, she became an award-winning basket weaver and continued in this craft for three decades. Upon retiring from her job of thirty years, she moved to San Diego, California. She volunteered for five years as a guide on the Whale Watching Boats, teaching people from around the world about the Pacific Ocean’s aquatic life.

At sixty-two, Ms. Garcia began to write her Europa Saga, a tantalizing, ten-part sci-fi series of intrigue, suspense, and mystery. Her saga is a fresh retelling of the story of Atlantis and its inhabitants. The books span six thousand years and four generations. Her story launched her into the world of a best-selling author.

Global warming, deforestation, pollution of our air and water, species loss, and the devastation of Earth itself are all subjects dear to Ms. Garcia’s heart. She has incorporated those themes into her later books, including books seven through nine of the Europa Saga and Extinction 2038. Her upcoming book Guardians of Earth and the sequel Guardians of Earth II, which should be released in early 2021, also deals with these subjects. If you’d like information on ways you can help stop global warming and other green topics, sign up for her newsletter.

Ms. Garcia also writes children’s books. A Cat for William is based on an authentic story about how a stray cat helps a man cope with a disabling disease. She is working on two more children’s books: The Story of Sudan: The Last Northern White Male Rhino and The Christmas Crayons, a story about a homeless boy who finds happiness in a box of crayons on Christmas Day. For more information, go to her web page: http://www.prgarcia1.com.

You have subscribed to alerts for P. R. Garcia.