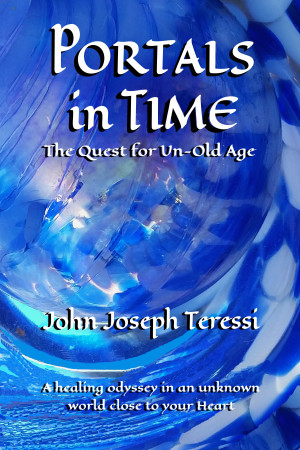 AMAZON LISTING & - REVIEWER: INDIE BOOK CLUB
“Portals in Time: The Quest for Un-Old-Age” is a mystical and magical journey through time that will inspire and delight you as you experience the wonder of nature and the mysteries of our minds.
The Eye of Time Exploration Team is sent via time-travel to save their civilization, which is on the verge of collapse. They must discover the Secret of Un-Old-Age to rescue their citizens who are aging prematurely.
The Gripps arrive in a mysterious land called Acronos, a place beyond time, filled with natural beauty. They encounter many intelligent, unusual life-forms and battle the powerful forces of nature beyond their control while fighting to survive on their perilous journey.
On their quest for Un-Old-Age, these intrepid explorers are greeted by the Guardians of Acronos, two highly-evolved time-travelers who attempt to share the secret wisdom of “The Seven Harmonies” that can change their lives.
Along their way, they encounter Phelan, the Zigalot, and Delphos, a spiritual, multidimensional being who provides wisdom in song and rhyme. They are amazed by the Bash Brothers at the Crossroads of Time where they must decide whether to live in the past, present or future. They engage the Startlings and are caught in a maze at the Hedges of Hedora, trapped at Crystal Falls, and meet themselves at Mirror Mountain, and so much more.
There are few times in our lives when we are able to become lost in a fantasy that can affect our lives in such a meaningful and positive way. You will not forget the characters and the wonder of nature in this story of love, patience, understanding, and redemption that will enhance your life and live in your heart.
This highly original, fantasy novel is a dramatic, inspirational adventure that will engage and entertain readers of all ages.
It is reminiscent of the feeling in the beloved books: "A Wrinkle in Time," "The Celestine Prophecy, "The Alchemist," "Alice in Wonderland," and "Jonathan Livingston Seagull."
You will enjoy and want to share “Portals in Time!”
Available ebook formats: epub mobi pdf lrf pdb txt html
First 15% Sample: epub mobi (Kindle) lrf more Online Reader
pdb
Price: $4.99 USD
Buy Add to Library Give as a Gift
How gifting works
Create Widget
Tags: inspirational metaphysical time travel mind and spirit fantasy quest harmony within nature fantasy aging reversal fiction sci fi wisdom of life
About John Teressi

John Teressi, a native Californian and second generation Italian, is fascinated by nature’s design, time and space, and the meaning and power of words. Teressi studied psychology, specializing in human factors engineering. His conceptual and writing abilities led to marketing, design, and fine art; and in his spare time, he entered the design contest for the new World Trade Center in New York. He created amazing, futuristic complex to replace the WTC on the website, www.7thProposal.com.

Curious about the underlying nature of reality, Teressi explored higher consciousness through the study of psychology and metaphysics. In his twenties when walking through a forest on the Monterey Peninsula, CA, he experienced a transformational &quot;moment suspended in time.&quot;

That spiritual awakening led him on a quest to experience many Power Places in Europe (Stonehenge and Avebury in England, Rennes Chateau in France, and the Paleolithic Cave Art of Northern Spain and caves of Drach in Majorca) and the pyramids of the Mexico City and the Yucatan among many others. These experiences influenced various passages in “Portals in Time: The Quest for Un-Old-Age.”

During his travels, he met many fascinating people. When living in Carmel on the Monterey Peninsula, Teressi became acquainted with Clint Eastwood, Gene Hackman, Merv Griffin and many more celebrities. At a charity event in London, he met Princess Diana. &quot;It was a highlight of my life,&quot; says Teressi. &quot;She was as lovely in person as you could possibly want her to be!&quot;

John also was honored to enjoy Christmas dinner with Lord and Lady Dashwood at their beautiful Palladium home, West Wycombe Estate, frequently featured in screen adaptations of literary classics such as &quot;Cranford&quot; and &quot;Little Dorrit&quot; and more recently in the television series, &quot;Downton Abbey.&quot;
The wisdom derived from Teressi’s extensive travels, led by curiosity and guided by intuition, inspired this lyrical adventure, “Portals in Time: The Quest for Un-Old-Age” that was written to uplift your soul and empower your heart.

You have subscribed to alerts for John Teressi.

You have been added to John Teressi's favorite list.

You can also sign-up to receive email notifications whenever John Teressi releases a new book.