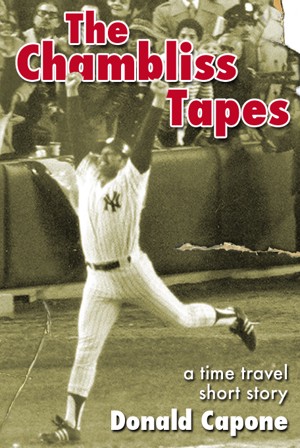 Donald Capone's stories have appeared in Edgar Literary Magazine, Word Riot, Weekly Reader's READ magazine, Thieves Jargon, as well as the anthologies See You Next Tuesday, Skive Quarterly 6, The Ampersand volume 4, and Rebellion: New Voices of Fiction, which he also edited, and which was a finalist in the 2006 USA Book News awards. His comic novel, Into the Sunset, is available on Amazon and other places. He works in publishing as a designer of children's novelty books.

I just received this 5-star Amazon review of my comic novel INTO THE SUNSET:

Funny premise. Flawless writing. But INTO THE SUNSET, offers more. Author Donald Capone dares to tackle subjects few writers would have the courage or ability to touch: senior citizens and the willingness of a 30-year-old man to disguise himself in order to live as one of them.

Ultimately, the "youngster" wearing makeup and donning a gray wig finds friendship, romance and genuine love. The bonds he makes during his life of deception lead him to discover new truths about himself, but not before hurting the very people whose trust he unintentionally betrays.

Only filmmaker, Ron Howard, could present such humor as he did through the movie COCOON and its sequel. Capone masterfully captures a similar hilarity, but through prose.

The story works on many levels, primarily due to the keen observations of the narrator, Wayne Benson. Even the setting descriptions are expertly woven into the story to give it color and a clear sense of place. But it is the author's uncanny talent for allowing his main character to be candid with his thoughts that makes the story spring brilliantly to life.

If there is a criticism of the novel (and there will always be some) it would be that the antagonist at the turning point is only briefly referred to in the first chapter. A little more description of this minor character at the onset would foreshadow that which follows later on. As it stands, the opening pages are a bit too "perfect." That is, the narrator's "master plan," as he calls it, is just too smooth. A monkey wrench thrown in early on would go a long way to providing a bit of conflict and tension to pull the reader in.

After that, the book sings. I laughed out loud, especially during a certain love scene and the trek to the grocery store. I didn't want the story to end. I hope to see more titles by this gifted writer.

Reviews of The Chambliss Tapes by Donald Capone

You have subscribed to alerts for Donald Capone.

You have been added to Donald Capone's favorite list.

You can also sign-up to receive email notifications whenever Donald Capone releases a new book.