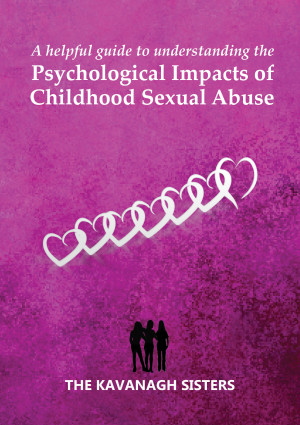 In our experience the hardest impacts of abuse to uncover and identify are the psychological impacts, making this crime extremely difficult to put behind you and move on with your life. With this in mind, we have developed this free ebook for you.

We believe that we endured years of unnecessary suffering because we didn’t possess the information in this ebook when our healing journey began. We could have saved ourselves a lot of unnecessary pain and heartache had we known. We are passionate about helping other survivors heal from the impacts of childhood trauma and that is why we are offering you the content in this ebook for free. We hope it helps you on your own healing journey.
Download: epub mobi (Kindle) pdf more Online Reader
lrf pdb txt
Price: Free! USD
Add to Library
Create Widget
Tags: abuse recovery abuse child abuse survivor abuse help abuse healing abuse therapy
About The Kavanagh Sisters

We are three sisters, Joyce, June and Paula Kavanagh. We are three of ten children, six boys and four girls born and raised in Dublin, Ireland in the 1960’s. We where each sexually abused by our father for over two decades. In 1989, we made the decision to bring charges against him and, in 1990; the Irish state took a successful case against him. He was convicted and sentenced to a term of seven years and was released having served five years.

In September 2011 we wrote our first book entitled ‘Click, Click’ which detailed our childhood experience. This book went straight to number one on the Irish non-fiction bestseller list. The book has been described as being “a powerful, emotional and sometimes harrowing story of childhood abuse.”

Our message of hope has resonated with readers not only in Ireland but across the UK. Following our UK appearance on ITV’s This Morning with Philip Schofield and Holly Willoughby, on May 3rd, 2012 the book went straight to number four on the Amazon UK bestseller list and went on to number three in the UK nonfiction best-seller list and stayed in the top ten for 10 weeks.

In December 2017 we self-published our second book ‘Why Go Back? 7 Steps to Healing from Childhood Sexual Abuse’. This is a book of hope for survivors of childhood sexual abuse. It is a unique resource that manages to blend theory with practical examples of how abuse can manifest in the lives of its victims. It provides real-life experiences of the variety of conditions and disorders that can develop as a result of being abused and what they look like in real life.

It is our intention to promote a greater understanding of childhood sexual abuse and encourage and motivate change.

Learn more about The Kavanagh Sisters

You have subscribed to alerts for The Kavanagh Sisters.

You have been added to The Kavanagh Sisters's favorite list.

You can also sign-up to receive email notifications whenever The Kavanagh Sisters releases a new book.