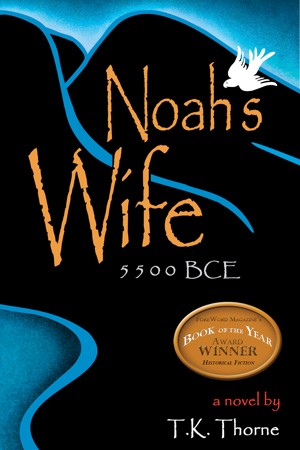 By T.K. Thorne
Rated 4.50/5 based on 2 reviews
Noah's wife is Na'amah, a young girl with what we now know as Asperger Syndrome, who only wishes to be a shepherdess on her beloved hills in ancient Turkey—a desire shattered by the hatred of her powerful brother, the love of two men, and a looming disaster that threatens her world.

Noah built an ark—but this story has never been told! More
Noah's wife is Na'amah, a young girl with what we now know as Asperger Syndrome, who only wishes to be a shepherdess on her beloved hills in ancient Turkey—a desire shattered by the hatred of her powerful brother, the love of two men, and a looming disaster that threatens her world.

Noah built an ark—but this story has never been told!

My name, Na’amah, means pleasant or beautiful. I am not always pleasant, but I am beautiful. Perhaps that is why I am trundled atop this beast like a roll of hides for market and surrounded by grim-faced men.

If my captors had bothered to ask me, I would have told them that their prize is of questionable value because my mind is damaged. But they did not, and I lie draped, belly down, across the back of an auroch, a large black ox with an eel stripe that runs down his spine and a stench worse than a rutting goat. My mouth is parched and swollen with dried blood, and every step the animal takes sends a jolt of pain into my chest. Snatches of ground appear between the cloven hooves—a succession of earth, grass, and rock obscured by the dark tangle of my hair—all I have to measure the growing distance from the life I have known.

T.K. has written two award-winning historical novels, NOAH'S WIFE and ANGELS AT THE GATE, filling in the untold backstories of extraordinary unnamed women—the wives of Noah and Lot—in two of the world’s most famous sagas. The New York Post’s “Books You Should Be Reading” list featured her first non-fiction book, LAST CHANCE FOR JUSTICE, which details the investigators’ behind-the-scenes stories of the 1963 Birmingham church bombing case. Her next project is HOUSE OF ROSE, the first of a trilogy in the paranormal-crime genre. She loves traveling and speaking about her books and life lessons. T.K. writes at her mountaintop home near Birmingham, Alabama, often with two dogs and a cat vying for her lap. She blogs about “What Moves Me” on her website, TKThorne.com. Join her private newsletter email list and receive a two free short stories at “TK’s Korner.”

Na’amah is different from the others in the village. Her hearing is uniquely acute as is her memory, but she lacks womanly skills such as weaving and spinning. Noah is a bit of an odd duck who lives outside the village where it’s convenient to steal logs from the beavers with which to build boats. He sees Na’amah in the market and smitten by her beauty, so he asks her father for her hand and receives it with the understanding that he will wait three years to take his bride who was young even for those days. Na’amah’s older brother, Tubal, is an abusive bastard who resents the fact that their mother died giving birth to Na’amah.

The one thing Na’amah loves to do is tend the sheep. She often shares the task with her childhood friend, Yanner, who develops a strong desire for her and conspires with Tubal to prevent her from marrying Noah. The plan is if she isn’t a virgin, Noah will reject her, so on the eve of the wedding, Tubal engineers for Yanner to forcibly rape her. For good measure, they also attack Noah and break his leg. Na’amah flees the village and is captured by slave traders before she reaches the sanctuary of the Mother Goddess’s cave.

Noah’s Wife is an engaging story that put me in mind of The Clan of the Cave Bear. As historical fiction, it resonates with verisimilitude and is not a retelling of Genesis. An unusual dynamic among the characters permeates the story in a curious way. The setting and the customs of the people seem real enough. Na’amah is a convincing and likeable character. The prose is clean and flowing if a little flowery for this reader’s taste. Ms. Thorne is fond of using unconventional verbs to describe actions in nature and more metaphors than I prefer. Most readers will find her style lovely and descriptive. There are scenes that I thought went on a little longer than was needed, but it did not diminish my enjoyment of the book.

I generally read techno-thrillers and police procedurals but Noah's Wife was recommended to me by a friend and I thought I would try it. Once, I started, I couldn't put it down. It's well written with vibrant characters and settings. I felt like I was in 5500 BCE before The Great Flood. Thorne does a great job moving the story along and adding in bits of history but it doesn't feel heavy. I highly recommend this book to anyone!

You have subscribed to alerts for T.K. Thorne.

You have been added to T.K. Thorne's favorite list.

You can also sign-up to receive email notifications whenever T.K. Thorne releases a new book.